Lead plaintiffs secured a $473 million settlement in the largest securities class action settlements against a pharmaceutical company at that time.

On October 1, 2013, the court granted final approval to a settlement with defendants Schering-Plough Corporation (Schering), Merck/Schering-Plough Pharmaceuticals (M/S-P), the individual defendants and the underwriter defendants in the amount of $473 million in cash, plus interest. The settlement resolved all claims in the action.

The lead plaintiffs, on behalf of the class, alleged that Schering, M/S-P, and certain of Schering's officers violated the federal securities laws, for among other reasons, failing to disclose material information concerning the commercial prospects of Vytorin (a cholesterol-lowering drug that is a combination of a drug developed by Merck (Zocor) and a drug developed by Schering (Zetia)), the commercial prospects of Zetia, and the results of a clinical trial known as ENHANCE that tested whether Vytorin was more effective than Zocor alone in reducing the intima-media thickness of the carotid arteries. The action also alleged that Schering, certain of Schering's officers, the director defendants and the underwriter defendants are statutorily responsible for false and misleading statements made in connection with offerings of Schering common stock and preferred stock in August 2007.

If you purchased or acquired Schering common stock, six percent mandatory convertible preferred stock maturing August 13, 2012, or call options, and/or sold Schering put options, during the period between January 3, 2007 through and including March 28, 2008 (the class period), and did not sell all of those shares and/or options on or before December 11, 2007, you may be eligible to recover if you submit a Claim Form with supporting documents by November 18, 2013.

A settlement hearing was held on October 1, 2013, at 10:00 a.m. before Judge Cavanaugh in the U.S. District Court for the District of New Jersey, in Courtroom PO 04 of the United States Post Office and Courthouse Building, Newark, NJ 07101. The deadline for objecting to the Settlement or for opting-back into the class has passed.

Copies of relevant settlement documents can be accessed by clicking on the links to the right. 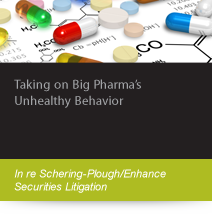 Motion for Final Approval of Settlement

Motion for Attorneys' Fees and Expenses