In the case known as "India's Enron," as co-lead counsel, we obtained more than $150 million in collective settlements, which includes $25.5 million settlement with the company's auditor.

The Honorable Barbara S. Jones of the United States District Court for the Southern District of New York granted final approval to two settlements in this proposed class action, In re Satyam Computer Services Ltd. Sec. Litig., No. 09-MD-2027-BSJ. On September 13, 2011, the court finally approved a settlement with Satyam Computer Services Ltd. (Satyam) in the amount of $125 million in cash, with the possibility of an additional recovery in the future. On September 13, 2011, the court also finally approved a settlement with Price Waterhouse (Bangalore), PricewaterhouseCoopers Private Limited, Lovelock & Lewes, PricewaterhouseCoopers International Limited, and PricewaterhouseCoopers LLP (the PwC Entities) in the amount of $25.5 million in cash.

The class alleges that Satyam, related entities, its auditors and certain directors and officers made materially false or misleading statements to the investing public in violation of Sections 10(b) and 20(a) of the Securities Exchange Act of 1934 and Sections 11, 12(a)(2) and 15 of the Securities Act of 1933, which had the effect of artificially inflating the price of Satyam securities.

If you: (a) purchased or otherwise acquired Satyam American Depository Shares (ADSs) traded on the New York Stock Exchange during the period from January 6, 2004 through January 6, 2009, inclusive (the class period) and were damaged thereby; and/or (b) were residing in the United States at the time you purchased or otherwise acquired Satyam Ordinary Shares traded on the Indian Exchanges during the class period and were damaged thereby (the class), you may be eligible to recover if you submitted a Proof of Claim form with supporting documents by September 23, 2011.

The deadline for objecting to the settlements or for seeking exclusion from the class for all purposes has passed. A settlement hearing was held on September 8, 2011 at 3:00 p.m. before Judge Barbara S. Jones in Courtroom 17C of the United States District Court for the Southern District of New York, Daniel Patrick Moynihan United States Courthouse, 500 Pearl Street, New York, NY 10007-1312.

Copies of relevant settlement documents can be accessed by clicking on the links to the right. 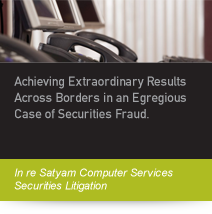 Stipulation of Settlement with PwC Entities

Stipulation of Settlement with Satyam