On September 20, 2013, the Honorable T.S. Ellis, III of the United States District Court for the Eastern District of Virginia granted final approval to the $97.5 million settlement with Computer Sciences Corporation (CSC), Michael W. Laphen, and Donald G. Debuck (collectively, the defendants) in the class action, In re Computer Sciences Corporation Securities Litigation, Civ. No. 11-610-TSE-IDD (E.D. Va.). The settlement, the third largest all cash recovery in a securities class action in the Fourth Circuit and the second largest all cash recovery in such a case in the Eastern District of Virginia, resolved all claims in the action.

Labaton Sucharow LLP is the court-appointed lead counsel for the class representative Ontario Teachers' Pension Plan Board and the settlement class.

The class representative, on behalf of the settlement class, alleges that CSC, an IT consulting and outsourcing company, fraudulently inflated its stock price by misrepresenting and omitting the truth about the state of its most visible contract and the state of its internal controls. In particular, class representative alleges that CSC assured the market that CSC was performing on a $5.4 billion contract with the UK National Health Services (NHS) when in fact, however, CSC internally knew that CSC could not deliver on the contract, had departed from the terms of the contract, and as a result was not properly accounting for the contract. The class representative alleges that the defendants violated Section 10(b) and 20(a) of the Securities Exchange Act of 1934 and rule 10b-5 promulgated thereunder by making false and misleading statements or omissions about the contract with NHS and CSC's internal controls. Class Representative alleges that these false statements and omissions caused the price of CSC common stock to be artificially inflated during the class period and that the price of CSC common stock dropped by 50 percent when the true extent of CSC's problems were disclosed.

On November 15, 2012, the Court entered an Order certifying the Class as a Class Action. On March 15, 2013, a Notice of Pendency of Class Action (class notice) was mailed to Class Members informing them that the action has been certified by the Court to proceed as a class action.

If you purchased or otherwise acquired Computer Sciences Corporation common stock between August 5, 2008 and December 27, 2011, inclusive (the settlement class period), and were allegedly damaged thereby, you may be entitled to a payment if you submit a Proof of Claim with supporting documents by October 8, 2013.

A settlement hearing was held on September 19, 2013, at 2:00 p.m. before Judge Ellis in Courtroom 900 of the United States District Court for the Eastern District of Virginia, Albert V. Bryan U.S. Courthouse, 401 Courthouse Square, Alexandria, VA 22314.

The deadline for objecting to the Settlement or for seeking exclusion from the settlement class has passed.

A copy of the Class Notice, Preliminary Approval Order, Stipulation of Settlement, Settlement Notice, Proof of Claim, and Final Order and Judgment can be accessed by clicking on the links to the right. 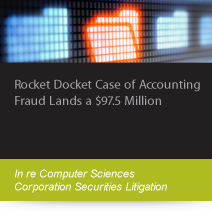 Memorandum of Law re Final Approval

Memorandum of Law re Attorneys' Fees

Declaration in Support of Final Approval and Attorneys Fees

Notice of Pendency of Class Action