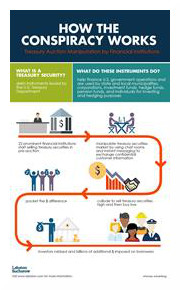 Gregory Asciolla, Co-Chair of Firm's Antitrust & Competition Litigation Practice, noted, "Treasury securities are the bedrock of this nation's financial security. This is a cause for great concern as investors worldwide are being injured and deceived."

Treasury securities—debt instruments issued by the U.S. Treasury Department—are not only used to help finance U.S. government operations, but are also used by state and local municipalities, corporations, investment funds, hedge funds, pension funds and individuals for investing and hedging purposes. Interest rates set by auctions for treasury securities are also used as benchmarks for many other types of debt and debt-related instruments, including student loan debt, bonds, interest rate swaps, and exchange-traded treasury futures and options.

The plaintiff claims that the defendants employed a multi-pronged scheme to effectively "sell high and buy low," colluding to induce investors to pay high prices for debt securities purchased from defendants in the pre-auction market, called the "when issued market," and to depress the price of the securities that the defendants themselves bought at auction to cover these sales, pocketing the difference.

According to the complaint, the defendants manipulated the treasury securities market by using chat rooms, instant messaging, and other methods to exchange confidential customer information and coordinate trading strategies.

"The defendants' scheme struck at the heart of the U.S. economy: the ability of the government to efficiently raise capital via Treasury auctions," said Labaton Sucharow partner Michael W. Stocker. "This collusion not only robbed investors participating in the 'when issued' market for these auction securities, but imposed billions in additional costs on borrowers ranging from students to municipalities."