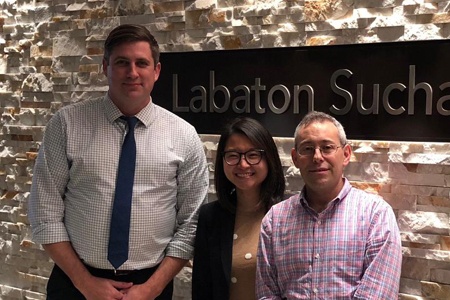 New York, October 15, 2018 – A pro bono team of lawyers and staff from Labaton Sucharow recently obtained asylum for a Pakistani national persecuted because of his Shia faith and marked for death by religious extremists.

The Firm’s client grew up in a small village in Punjab, Pakistan, but fled the country after his father was murdered by extremists. In March 2017, he moved his family back to Punjab, not far from his home town, where he began helping poor members of his community by offering schooling, food, and money to both Shias and Sunnis. This charitable activity angered Sunni-extremist groups who view Shias as heretics and believe such charitable activities by Shias to be blasphemous.

Because of their charitable work, the Firm’s client and his family were targeted and attacked by an anti-Shia group known as the Sipah-e-Sahaba (“SSP”). The SSP, along with other militant religious extremist groups like the Taliban, is reportedly responsible for countless atrocities against the Shia community including bombings of mosques, targeted killings of ordinary citizens, and other acts of sectarian violence.

Fearing for his life, in March 2018, the Firm’s client sought asylum in the United States. He was detained by ICE for unlawful entry and held in the Elizabeth Contract Detention Facility in New Jersey.

In early June 2018, the case was assigned to the Firm by the Immigration Justice Campaign, a pro bono partner the firm has worked with in the past. The principal attorneys who litigated the case were associates John Esmay and Wendy Tsang. They were supported by partner mentors Michael Rogers and Serena Hallowell, associate Derick Cividini, and paralegals Shella Mundo and Elaine Chan. Summer Associate Manipal Singh also played a crucial role as translator and confidant to the client.

According to Esmay, the key to winning the case was the “mountain of evidence” the team compiled in such a short time frame which overwhelmingly supported the client’s claim for asylum. The evidence included a lengthy declaration from the client (the result of several long interviews with the client while in detention), more than a dozen affidavits from eyewitnesses, 15 country condition reports which detailed general conditions of the state of human rights in Pakistan, and an expert report from a Pakistani human rights lawyer familiar with the SSP.

On September 11, 2018, the Labaton Sucharow team appeared before Immigration Judge Nelson A. Padilla for an evidentiary hearing lasting three hours. The hearing was continued on a last minute request by the government attorney to conduct a forensic analysis of the affidavits submitted in support of the asylum application.

On October 12, 2018, the Court resumed the proceedings, heard closing arguments, and issued its ruling from the bench. In granting asylum, the Court found the client’s testimony credible and consistent with the evidence submitted. After the ruling, the government waived its right to appeal.

The Firm’s Pro Bono Immigration Team continues to work on other immigration matters in New Jersey and Miami, Florida.