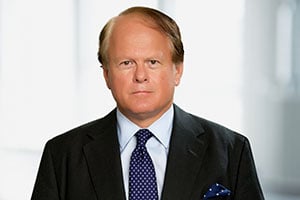 Thomas A. Dubbs is a Partner in the New York office of Labaton Sucharow LLP.  Tom focuses on the representation of institutional investors in domestic and multinational securities cases.  Tom serves or has served as lead or co-lead counsel in some of the most important federal securities class actions in recent years, including those against American International Group, Goldman Sachs, the Bear Stearns Companies, Facebook, Fannie Mae, Broadcom, and WellCare.

Tom is highly-regarded in his practice. He has been named a top litigator by Chambers & Partners USA for more than 10 consecutive years and has been consistently ranked as a Leading Lawyer in Securities Litigation by The Legal 500. Law360 named him an MVP of the Year for distinction in class action litigation and he has been recognized by The National Law Journal and Benchmark Litigation for excellence in securities litigation. Lawdragon has recognized Tom as one of the country’s “500 Leading Plaintiff Financial Lawyers” and named him to their Hall of Fame. Tom has also received a rating of AV Preeminent from the publishers of the Martindale-Hubbell directory. In addition, The Legal 500 has inducted Tom into its Hall of Fame—an honor presented to only four plaintiffs’ securities litigators “who have received constant praise by their clients for continued excellence.”

Representing an affiliate of the Amalgamated Bank, Tom successfully led a team that litigated a class action against Bristol-Myers Squibb, which resulted in a settlement of $185 million as well as major corporate governance reforms.  He has argued before the U.S. Supreme Court and has argued 10 appeals dealing with securities or commodities issues before the U.S. Courts of Appeals.

Due to his reputation in securities law, Tom frequently lectures to institutional investors and other groups, such as the Government Finance Officers Association, the National Conference on Public Employee Retirement Systems, and the Council of Institutional Investors.  He is a prolific author of articles related to his field, including "Textualism and Transnational Securities Law: A Reappraisal of Justice Scalia's Analysis in Morrison v. National Australia Bank," which he penned for the Southwestern Journal of International Law.  He has also written several columns in U.K. publications regarding securities class actions and corporate governance.

Prior to joining Labaton Sucharow, Tom was Senior Vice President & Senior Litigation Counsel for Kidder, Peabody & Co. Incorporated, where he represented the company in many class actions, including the First Executive and Orange County litigation and was first chair in many securities trials.  Before joining Kidder, Tom was head of the litigation department at Hall, McNicol, Hamilton & Clark, where he was the principal partner representing Thomson McKinnon Securities Inc. in many matters, including the Petro Lewis and Baldwin-United class actions.

Tom serves as a FINRA Arbitrator and is an Advisory Board Member for the Institute for Transnational Arbitration.  He is a member of the New York State Bar Association and the Association of the Bar of the City of New York, as well as a patron of the American Society of International Law.  Tom is an active member of the American Law Institute and is currently an adviser on the proposed Restatement of the Law Third, Conflict of Laws; he was also a member of the Consultative Groups for the Restatement of the Law Fourth, U.S. Foreign Relations Law, and the Principles of Law, Aggregate Litigation.  Tom also serves on the Board of Directors for The Sidney Hillman Foundation.