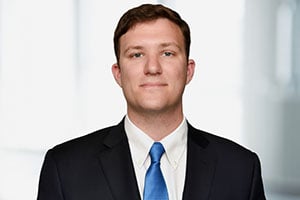 Thomas Curry is an associate in the Delaware office of Labaton Sucharow LLP. He represents investors in corporate governance matters, with a particular focus on M&A litigation in the Delaware Court of Chancery.

Tom has been named a Rising Star in the field of M&A litigation and described as a “star associate” by The Legal 500.

Tom is presently involved in prosecuting several stockholder class and derivative actions, including a high-profile challenge to Dell’s 2018 repurchase of its Class V tracking stock.

Tom’s past matters include the successful representation of the lead petitioners in appraisal actions arising from Coach’s acquisition of Kate Spade and General Electric’s combination of its oil and gas business with Baker Hughes. Tom also was a key member of teams that secured a $35.5 million derivative recovery in litigation arising from AGNC Investment Corp.’s internalization of its investment manager and corporate reforms valued at approximately $25 million in litigation arising from a related-party loan extended by Clear Channel Outdoor Holdings to its controlling stockholder, iHeart Communications.

Tom has deposed directors, CEOs, and other C-suite executives of major American corporations. He has also successfully presented oral argument in the Court of Chancery.

Tom earned a Juris Doctor from Cornell Law School and a Bachelor of Arts from Temple University.