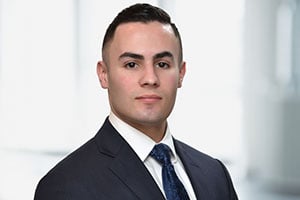 Philip is actively involved in Labaton Sucharow’s pro bono immigration program, where he reunited a father and child separated at the border and is currently working on their asylum application.  Philip also serves as a member of Labaton Sucharow’s Diversity, Equity, and Inclusion Committee.

Previously, Philip served as a Judicial Intern in the United States District Court, Eastern District of New York under the Honorable Joanna Seybert.

Philip is conversant in Italian.