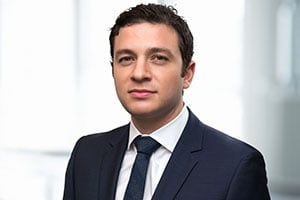 Ned Weinberger is a Partner in the Delaware office of Labaton Sucharow LLP and is chair of the Firm’s Corporate Governance and Shareholder Rights Litigation Practice.  An experienced advocate of shareholder rights, Ned focuses on representing investors in corporate governance and transactional matters, including class action and derivative litigation.

Highly regarded in his practice, Ned has been recognized by Chambers & Partners USA in the Delaware Court of Chancery noting he is “a very good case strategist and strong oral advocate” and was named “Up and Coming” for three consecutive years—the by-product of his impressive range of practice areas. After being named a “Future Star” earlier in his career, Ned is now recognized by Benchmark Litigation as a “Litigation Star” and has been selected to Benchmark's “40 & Under List.” He has also been named a “Leading Lawyer” by The Legal 500, whose sources remarked that he “is one of the best plaintiffs’ lawyers in Delaware,” who “commands respect and generates productive discussion where it is needed.” The National Law Journal has also named Ned a “Plaintiffs’ Trailblazer.”  Lawdragon has also recognized him as one of the country’s “500 Leading Plaintiff Financial Lawyers.” Notably, Ned was named a “Litigator of the Week” by The American Lawyer Litigation Daily for securing a historic $1 billion cash settlement in a suit against Dell Technologies.

Ned is actively prosecuting, among other matters, In re Straight Path Communications Inc. Consolidated Stockholder Litigation, which alleges breaches of fiduciary duty by the controlling stockholder of Straight Path Communications, Howard Jonas, in connection with the company’s sale to Verizon Communications Inc.  He recently led a class and derivative action on behalf of stockholders of Providence Service Corporation—Haverhill Retirement System v. Kerley—that challenged an acquisition financing arrangement involving Providence’s board chairman and his hedge fund.  The case settled for $10 million.

Ned was part of a team that achieved a $12 million recovery on behalf of stockholders of ArthroCare Corporation in a case alleging breaches of fiduciary duty by the ArthroCare board of directors and other defendants in connection with Smith & Nephew, Inc.’s acquisition of ArthroCare.  Other recent successes on behalf of stockholders include In re Vaalco Energy Inc. Consolidated Stockholder Litigation, which resulted in the invalidation of charter and bylaw provisions that interfered with stockholders’ fundamental right to remove directors without cause.

Prior to joining Labaton Sucharow, Ned was a Litigation Associate at Grant & Eisenhofer P.A. where he gained substantial experience in all aspects of investor protection, including representing shareholders in matters relating to securities fraud, mergers and acquisitions, and alternative entities.  Representative of Ned's experience in the Delaware Court of Chancery is In re Barnes & Noble Stockholders Derivative Litigation, in which Ned assisted in obtaining approximately $29 million in settlements on behalf of Barnes & Noble investors.  Ned was also part of the litigation team in In re Clear Channel Outdoor Holdings, Inc. Shareholder Litigation, the settlement of which provided numerous benefits for Clear Channel Outdoor Holdings and its shareholders, including, among other things, a $200 million cash dividend to the company's shareholders.

Ned is a Member of the Advisory Board of the Institute for Law and Economic Policy (ILEP), a research and educational foundation dedicated to enhancing investor and consumer access to the civil justice system.