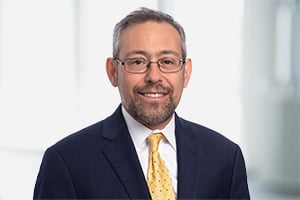 He is actively involved in prosecuting In re Goldman Sachs, Inc. Securities Litigation and Murphy v. Precision Castparts Corp, among other cases.

Prior to joining Labaton Sucharow, Mike was an attorney at Kasowitz, Benson, Torres & Friedman LLP, where he practiced securities and antitrust litigation, representing international banking institutions bringing federal securities and other claims against major banks, auditing firms, ratings agencies and individuals in complex multidistrict litigation.  He also represented an international chemical shipping firm in arbitration of antitrust and other claims against conspirator ship owners.  Mike began his career as an attorney at Sullivan & Cromwell, where he was part of Microsoft’s defense team in the remedies phase of the Department of Justice antitrust action against the company.

Mike is proficient in Spanish.