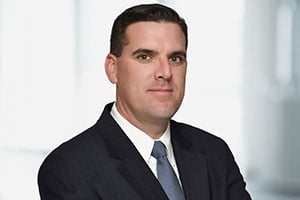 Michael P. Canty is a Partner in the New York office of Labaton Sucharow LLP, where he serves on the Firm’s Executive Committee and as its General Counsel.  In addition, he leads one of the Firm’s Securities Litigation Teams and serves as head of the Firm’s Consumer Cybersecurity and Data Privacy Group.

Highly regarded as one of the countries elite litigators, Michael has been recognized by The Legal 500 and Benchmark Litigation as a “litigation star.”  In addition, he has been named a Plaintiffs’ Trailblazer and a NY Trailblazer by The National Law Journal and the New York Law Journal, respectively, for his impact on the practice and business of law, as well as one of the “500 Leading Plaintiff Financial Lawyers in America” and one of the country’s “Leading Plaintiff Consumer Lawyers” by Lawdragon.

In addition to his securities practice, Michael has extensive experience representing consumers in high-profile data privacy litigation.  Most notably, one of Michael’s most recent successes was the historic $650 million settlement in the In re Facebook Biometric Information Privacy Litigation matter—the largest consumer data privacy settlement ever and one of the first cases asserting consumers’ biometric privacy rights under Illinois’ Biometric Information Privacy Act (BIPA).  Michael currently serves as co-lead counsel in Garner v. Amazon.com, Inc. alleging Amazon’s illegal wiretapping and surreptitious recording through its Alexa-enabled devices.

Prior to joining Labaton Sucharow, Michael served as an Assistant U.S. Attorney in the U.S. Attorney’s Office for the Eastern District of New York, where he was the Deputy Chief of the Office’s General Crimes Section.  During his time as a federal prosecutor, Michael also served in the Office’s National Security and Cybercrimes Section.  Prior to this, he served as an Assistant District Attorney for the Nassau County District Attorney’s Office, where he handled complex state criminal offenses and served in the Office’s Homicide Unit.

Michael has extensive trial experience both from his days as a prosecutor in New York City for the U.S. Department of Justice and as a Nassau County Assistant District Attorney. Michael served as trial counsel in more than 35 matters, many of which related to violent crime, white-collar, and terrorism-related offenses. He played a pivotal role in United States v. Abid Naseer, where he prosecuted and convicted an al-Qaeda operative who conspired to carry out attacks in the United States and Europe.  Michael also led the investigation in United States v. Marcos Alonso Zea, a case in which he successfully prosecuted a citizen for attempting to join a terrorist organization in the Arabian Peninsula and for providing material support for planned attacks.

Before becoming a prosecutor, Michael worked as a Congressional Staff Member for the U.S. House of Representatives.  He primarily served as a liaison between the Majority Leader’s Office and the Government Reform and Oversight Committee.  During his time with the House of Representatives, Michael managed congressional oversight of the United States Postal Service and reviewed and analyzed counter-narcotics legislation as it related to national security matters.

Michael is a frequent commentator on legal issues and has been featured in The Washington Post, Law360, and The National Law Journal, among others and has appeared on CBS and NPR.

He is a member of the Federal Bar Council American Inn of Court, which endeavors to create a community of lawyers and jurists and promotes the ideals of professionalism, mentoring, ethics, and legal skills.  He is also a member of the National Association of Public Pension Attorneys.