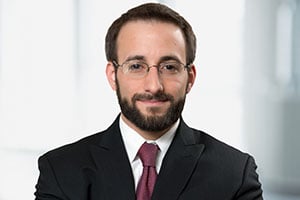 Matthew has been named a "Rising Star" by The Legal 500.

Matthew joined Labaton Sucharow from the New York State Attorney General's office, where he served as a Volunteer Assistant Attorney General in the Antitrust Bureau.  While there, he received the Louis J. Lefkowitz Memorial Award for his work investigating bid rigging and other illegal conduct in the municipal bond derivatives market, resulting in more than $260 million in restitution to municipalities and nonprofit entities.  He also investigated pay-for-delay matters involving multinational pharmaceutical companies.  Prior to that, he served as an intern for the Honorable Richard B. Lowe III at the New York Supreme Court, Commercial Division.

Matthew earned his Juris Doctor from Benjamin N. Cardozo School of Law School, where he was executive editor of the Cardozo Journal of Conflict Resolution and received the Jacob Burns Medal for Outstanding Contribution to the Law School.  He received his bachelor's degree from Swarthmore College.