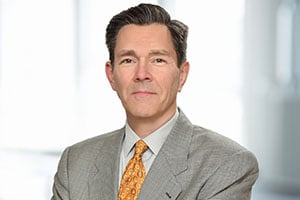 Mark S. Willis is a Partner in the D.C. office of Labaton Sucharow LLP. With more than three decades of experience, his practice focuses on domestic and international securities litigation. Mark advises leading pension funds, investment managers, and other institutional investors from around the world on their legal remedies when impacted by securities fraud and corporate governance breaches.

Mark is recommended by The Legal 500 for excellence in securities litigation and has been named one of Lawdragon’s “500 Leading Plaintiff Financial Lawyer in America.”  Under his leadership, the Firm has been awarded Law360 Practice Group of the Year Awards for Class Actions and Securities.

In U.S. matters, Mark currently represents Caisse de dépôt et placement du Québec, one of Canada’s largest institutional investors, against PayPal in one of the largest ongoing U.S. shareholder class actions, as well as the Utah Retirement Systems in several pending shareholder actions.  He represented institutions from the UK, Spain, the Netherlands, Denmark, Germany, Belgium, Canada, Japan and the U.S. in a novel lawsuit in Texas against BP plc that salvaged claims dismissed from the parallel U.S. class action.  In the Converium class action, Mark represented a Greek institution in a nearly four-year battle that eventually became the first U.S. class action settled on two continents (i.e., New York and Amsterdam).  The Dutch portion of this $145 million trans-Atlantic recovery involved a landmark decision that substantially broadened that court’s jurisdictional reach to a scenario where the claims were not brought under Dutch law, the wrongdoing occurred outside the Netherlands, and none of the parties were domiciled there.  In the Parmalat case, known as the “Enron of Europe” due to the size and scope of the fraud, Mark represented a group of European institutions and eventually recovered nearly $100 million and negotiated governance reforms with two large European banks, making this the first time in a shareholder class action that such reforms were secured from non-issuer defendants.

Mark also heads the firm’s Non-U.S. practice, advising clients in over 100 cases in jurisdictions such as Australia, Japan, Brazil, Canada, the UK, Germany, the Netherlands, Italy, Denmark, and elsewhere. This practice is wholly unique in that it is genuinely global, independent, and fully comprehensive.

Mark has written on corporate, securities, and investor protection issues—often with an international focus—in industry publications such as International Law News, Professional Investor, European Lawyer, and Investment & Pensions Europe. He has also authored several chapters in international law treatises on European corporate law and on the listing and subsequent disclosure obligations for issuers listing on European stock exchanges. He also speaks at conferences and at client forums on investor protection through the U.S. federal securities laws, corporate governance measures, and the impact on shareholders of non-U.S. investor remedies.