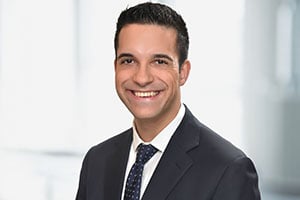 Marco A. Dueñas is an Associate in the New York office of Labaton Sucharow LLP.  A dedicated trial lawyer with more than a decade of legal experience, Marco prosecutes complex securities litigation cases in trial courts throughout the United States and abroad.  He focuses his practice on representing institutional investors in domestic and multinational securities cases to recover investment losses and vindicate shareholder rights.

Marco is fluent in Spanish.