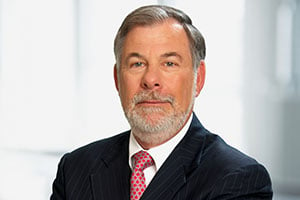 Lawrence A. Sucharow is a Senior Advisor to Labaton Sucharow LLP.  Larry served as Chairman of the Firm for more than 20 years and, under his guidance, the Firm has earned its position as one of the top plaintiffs' securities and antitrust class action firms in the world.  Larry’s practice focused on counseling the Firm’s large institutional clients, developing creative and compelling strategies to advance and protect clients’ interests, and prosecuting and resolving many of the Firm’s leading cases.  With more than four decades of experience, Larry is an internationally recognized trial lawyer and a leader of the class action bar.

In recognition of his career accomplishments and standing in the securities bar, Larry was selected by Law360 as one the 10 Most Admired Securities Attorneys in the United States and as a Titan of the Plaintiffs Bar.  Larry was honored with the National Law Journal’s Elite Trial Lawyers Lifetime Achievement Award, and he is one of a small handful of plaintiffs’ securities lawyers in the United States recognized by Chambers & Partners USA, The Legal 500, and Benchmark Litigation for his successes in securities litigation.  Larry has been consistently recognized by Lawdragon as one of the country’s leading lawyers, and in 2020, Larry was inducted into the Hall of Fame in recognition of his outstanding contributions as a leader and litigator.  Referred to as a “legend” by his peers in Benchmark Litigation, Chambers describes him as an “immensely respected plaintiff advocate” and a “renowned figure in the securities plaintiff world...[that] has handled some of the most high-profile litigation in this field.”  According to The Legal 500, clients characterize Larry as “a strong and passionate advocate with a desire to win.”  In addition, Brooklyn Law School honored Larry as Alumni of the Year Award in 2012 for his notable achievements in the field.

Over the course of his career, Larry has prosecuted hundreds of cases and the Firm has recovered billions in groundbreaking securities, antitrust, business transaction, product liability, and other class actions.  In fact, a landmark case tried in 2002—In re Real Estate Associates Limited Partnership Litigation—was the very first securities action successfully tried to a jury verdict following the enactment of the Private Securities Litigation Reform Act (PSLRA).

Larry’s consumer protection experience includes leading the national litigation against the tobacco companies in Castano v. American Tobacco Co., as well as litigating In re Imprelis Herbicide Marketing, Sales Practices and Products Liability Litigation.  Larry played a key role in In re Takata Airbag Products Liability Litigation and a nationwide consumer class action against Volkswagen Group of America, Inc., arising out of the wide-scale fraud concerning Volkswagen’s “Clean Diesel” vehicles.  Larry further conceptualized the establishment of two Dutch foundations, or “Stichtingen” to pursue settlement of claims against Volkswagen on behalf of injured car owners and investors in Europe.

In 2018, Larry was appointed to serve on Brooklyn Law School’s Board of Trustees.  He has served a two-year term as President of the National Association of Shareholder and Consumer Attorneys, a membership organization of approximately 100 law firms that practice complex civil litigation including class actions.  A longtime supporter of the Federal Bar Council, Larry serves as a trustee of the Federal Bar Council Foundation.  He is a member of the Federal Bar Council’s Committee on Second Circuit Courts, and the Federal Courts Committee of the New York County Lawyers’ Association.  He is also a member of the Securities Law Committee of the New Jersey State Bar Association and was the Founding Chairman of the Class Action Committee of the Commercial and Federal Litigation Section of the New York State Bar Association, a position he held from 1988-1994.  In addition, Larry serves on the Advocacy Committee of the World Federation of Investors Corporation, a worldwide umbrella organization of national shareholder associations.  In May 2013, Larry was elected Vice Chair of the International Financial Litigation Network, a network of law firms from 15 countries seeking international solutions to cross-border financial problems.