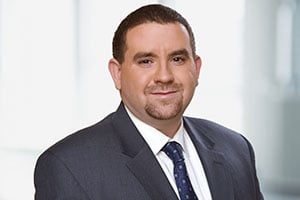 John Vielandi is Of Counsel in the New York office of Labaton Sucharow LLP.  John researches, analyzes and assesses potential new shareholder litigations with a focus on breaches of fiduciary duty and mergers and acquisitions.

John joined the Firm from Bernstein Litowitz Berger & Grossmann, where he was a key member of the teams that litigated numerous high profile actions, including City of Monroe Employees’ Retirement System v. Rupert Murdoch et al. and In re Vaalco Energy, Inc. Consolidated Stockholder Litigation.  While in law school, John was a legal intern at the New York City Office of Administrative Trials and Hearings and a judicial intern for the Honorable Carolyn E. Demarest of the New York State Supreme Court.

John earned his Juris Doctor from Brooklyn Law School, where he was the Notes and Comments Editor for the Journal of Corporate, Financial and Commercial Law, and was awarded the CALI Excellence for the Future Award.  He received his bachelor’s degree from Georgetown University.