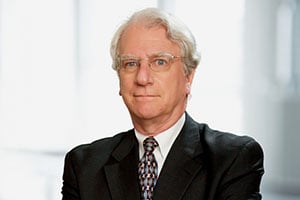 Jay L. Himes is Senior Counsel in the New York office of Labaton Sucharow LLP and former co-chair of the Firm's Antitrust and Competition Litigation Practice. Jay is concentrating on professional engagements after more than 45 years of complex litigation and counseling, with an emphasis on antitrust.

Jay is a past recipient of the New York State Bar Association’s (NYSBA's) Antitrust Section William T. Lifland Service Award for distinguished service. He is consistently ranked by Chambers & Partners USA and has been described as “a walking encyclopedia of case law . . . thoughtful, well-read and a first-rate lawyer.” The Legal 500 called him “a very solid and highly experienced antitrust lawyer.” In addition, Jay is recognized by Lawdragon as one of the “500 Leading Plaintiff Financial Lawyers in America.”

Jay was appointed by United States District Judge Orrick to serve as the monitoring trustee under the final judgment in United States of America v. Bazaarvoice, Inc. Upon completion of the four-year appointment, the Court thanked him for having “diligently and effectively monitored the defendant’s compliance” and for having “worked through innumerable complex issues . . . with obvious skill and sensitivity.”

A regular speaker at conferences focusing on such subjects as antitrust, class actions, international litigation and arbitration, trade law and data protection, Jay has authored many conference papers and published articles. He has lectured annually on U.S. cartel and private action enforcement at the Zurich University of Applied Science's international competition and compliance programs, offered in Geneva, Winterthur and Zurich, Switzerland, to foreign competition law officials and practitioners. He also has presented at conferences in Europe (Amsterdam, Berlin, Dublin, Krakow, Lisbon, Paris, Stockholm, Vienna, Winterthur, and Zurich), Latin America (Antigua and Sao Paolo), and the Far East (Hanoi, Seoul, and Tokyo), as well as in Montreal and the United States.

Prior to joining Labaton Sucharow, Jay served for nearly eight years as the Antitrust Bureau Chief in the New York Attorney General's office. In that role, he was the States’ principal representative in the marathon 2001 negotiations that led to settlement of the governments’ landmark monopolization case against Microsoft. Thereafter, Jay partnered with U.S. DOJ officials to lead the Microsoft judgment monitoring and enforcement effort, an activity that continued throughout his time at the Attorney General's office.

Before serving in the Attorney General’s office, Jay practiced complex litigation for 25 years at Paul, Weiss, Rifkind, Wharton & Garrison LLP. There, he represented the 12 Federal Reserve Banks as plaintiffs in a price-fixing case against the nation's leading armored car companies and defended a Revlon healthcare company in a series of price-fixing cases that spanned nearly a decade. Additionally, Jay handled a wide range of litigation, including securities class actions as well as contract, construction, constitutional, entertainment, environmental, real property, and tax litigation. Active in pro bono matters, Jay worked with the New York Civil Liberties Union, NAACP, and National Coalition for the Homeless, while also representing inmate and immigration asylum clients. He similarly has represented asylum clients at Labaton Sucharow.

Jay currently chairs the New York State Bar Association’s (NYSBA’s) International Section, which has over 1,800 members worldwide. Jay is a representative to NYSBA’s sections caucus and co-chairs the antitrust committees of both the State Bar's Commercial and Federal Litigation and International sections. He is also a member of antitrust, litigation, and intellectual property groups in the American Bar Association. He also is a past chair of NYSBA’s Antitrust Section and served a four-year term as the Section's delegate to the House of Delegates.