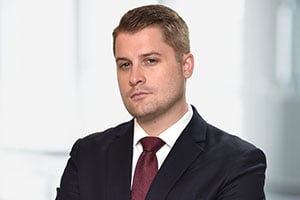 James Christie is a Partner in the New York office of Labaton Sucharow LLP.  James focuses on prosecuting complex securities fraud cases on behalf of institutional investors.  He is currently involved in litigating cases against major U.S. and non-U.S. corporations, such as Alexion Pharmaceuticals, GoGo, 2U, Precision Castparts, Flex, CannTrust Holdings, iQIYI, and Weatherford International.  James also serves as Assistant General Counsel of the Firm.
James has been recognized as a "Rising Star of the Plaintiffs Bar" by The National Law Journal Elite Trial Lawyers and Benchmark Litigation named him to their “40 & Under List.”
James was an integral part of the Firm team that helped recover $192.5 million for investors in a settlement for In re SCANA Corporation Securities Litigation.  James also assisted in recovering $20 million on behalf of investors in a securities class action against LifeLock Inc., where he played a significant role in obtaining a key appellate victory in the Ninth Circuit Court of Appeals reversing the district court’s order dismissing the case with prejudice.  In addition, James assisted in the $14.75 million recovery secured for investors against PTC Therapeutics Inc., a pharmaceutical manufacturer of orphan drugs, in In re PTC Therapeutics, Inc. Securities Litigation.  He was also part of the team that represented the lead plaintiff, the Public Employees’ Retirement System of Mississippi, in Public Employees' Retirement System of Mississippi v. Sprouts Farmers Market Inc., which resulted in a $9.5 million settlement against Sprouts Farmers Market and several of its senior officers and directors.

James previously served as a Judicial Intern in the U.S. District Court for the Eastern District of New York under the Honorable Sandra J. Feuerstein.
He is a member of the American Bar Association and the Federal Bar Council.