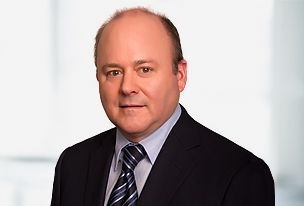 James W. Johnson is a Partner in the New York office of Labaton Sucharow LLP.  Jim focuses on complex securities fraud cases. In addition to his active caseload, Jim holds a variety of leadership positions within the Firm, including serving on the Firm's Executive Committee.  He also serves as the Firm's Executive Partner overseeing firm-wide issues.

Jim is “well respected in the field,” earning him recognition from Chambers & Partners USA, The Legal 500, Benchmark Litigation, and Lawdragon, who named him as one of the “500 Leading Lawyers in America” and one of the country’s top “Plaintiff Financial Lawyers.” He has also received a rating of AV Preeminent from the publishers of the Martindale-Hubbell directory.

In representing investors who have been victimized by securities fraud and breaches of fiduciary responsibility, Jim's advocacy has resulted in record recoveries for wronged investors.  Currently, he is prosecuting the high-profile case against financial industry leader Goldman Sachs—In re Goldman Sachs Group, Inc. Securities Litigation.

In County of Suffolk v. Long Island Lighting Co., Jim represented the plaintiff in a RICO class action, securing a jury verdict after a two-month trial that resulted in a $400 million settlement.  The Second Circuit quoted the trial judge, Honorable Jack B. Weinstein, as stating "counsel [has] done a superb job [and] tried this case as well as I have ever seen any case tried." On behalf of the Chugach Native Americans, he also assisted in prosecuting environmental damage claims resulting from the Exxon Valdez oil spill.

Jim is a Member of the American Bar Association and the Association of the Bar of the City of New York, where he served on the Federal Courts Committee.  He is also a Fellow in the Litigation Council of America and a Member of the Advisory Board of the Institute for Law and Economic Policy.

Jim earned his Juris Doctor from New York University School of Law and his bachelor's degree from Fairfield University.