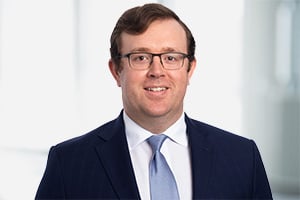 Prior to joining Labaton Sucharow, James was an Associate at Bernstein Litowitz Berger & Grossmann LLP where he was involved in the prosecution of several high profile securities class actions including In re Equifax Inc. Securities Litigation ($149 million settlement); In re Novo Nordisk Securities Litigation ($100 million settlement); In re The Boeing Company Aircraft Securities Litigation, an action relating to safety problems with its 737 MAX planes that resulted in multiple crashes; and Sjunde AP-Fonden v. Goldman Sachs Group Inc., an action stemming from Goldman Sachs’ work for a Malaysian infrastructure and economic development fund that became embroiled in a corruption scandal.  Prior to law school, James served as a legislative aide in the U.S. Senate.

James is a member of the Federal Bar Council’s First Decade Committee.

James earned a Juris Doctor from Boston College Law School, where James was Executive Articles Editor of the Boston College International & Comparative Law Review and received a Bachelor of Arts in Political Science from the University of Pennsylvania, where he was captain of the swim team and received the Class of 1915 Award in recognition of academic and athletic achievements.