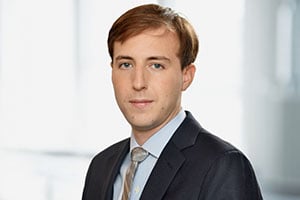 Jake Bissell-Linsk is a Partner in the New York office of Labaton Sucharow LLP.  Jake focuses his practice on securities fraud class actions.

Jake has litigated federal securities cases in jurisdictions across the country at both the District Court and Appellate Court level.  He is currently litigating cases against Lucid Motors and Lordstown Motors involving de-SPAC mergers in the automotive industry; against Intelsat alleging insiders sold $246 million in stock shortly after learning the FTC would reject a bet-the-company deal; against AT&T, citing 58 former AT&T employees, regarding misleading reports of the success of its video streaming service DirecTV Now; and against Cronos alleging it improperly booked revenue from round-trip transactions for cannabis processing.

In addition to these varied securities fraud cases, Jake has litigated a number of cases involving take-private mergers, including several cases involving Chinese-based and Cayman-incorporated firms that were delisted from U.S. exchanges.

Jake has played a pivotal role in securing favorable settlements for investors in a variety of securities class actions, including recent cases against Nielsen ($73 million settlement), in a suit that involved allegations of inflated goodwill and the effect of the EU’s GDPR on the company, and Mindbody ($9.75 million settlement), in a suit alleging false guidance and inadequate disclosures prior to a private equity buyout.