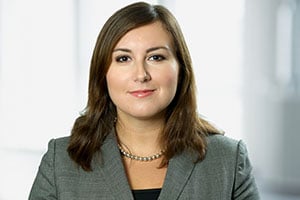 Irina Vasilchenko is a Partner in the New York office of Labaton Sucharow LLP and head of the Firm’s Associate Training Program. Irina focuses on prosecuting complex securities fraud cases on behalf of institutional investors and has over a decade of experience in such litigation.

Irina is recognized as an up-and-coming litigator whose legal accomplishments transcend her age. She has been named repeatedly to Benchmark Litigation’s “40 & Under List” and also has been recognized as a “Future Star” by Benchmark Litigation and a “Rising Star” by Law360, one of only six securities attorneys in its 2020 list. Additionally, Lawdragon has named her one of the “500 Leading Plaintiff Financial Lawyers in America.”

Currently, Irina is involved in prosecuting the high-profile case against financial industry leader Goldman Sachs, In re Goldman Sachs Group, Inc. Securities Litigation, arising from its Abacus and other subprime mortgage-backed CDOs during the Financial Crisis, including defending against an appeal of the class certification order to the U.S. Supreme Court and to the Second Circuit. She is also actively prosecuting Weston v. DocuSign, Inc.; In re Teladoc Health, Inc. Securities Litigation; and Meitav Dash Provident Funds and Pension Ltd. v. Spirit AeroSystems Holdings, Inc.

Irina maintains a commitment to pro bono legal service, including representing an indigent defendant in a criminal appeal case before the New York First Appellate Division, in association with the Office of the Appellate Defender. As part of this representation, she argued the appeal before the First Department panel. Prior to joining Labaton Sucharow, Irina was an Associate in the general litigation practice group at Ropes & Gray LLP, where she focused on securities litigation.

Irina is fluent in Russian and proficient in Spanish.