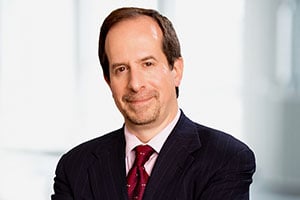 A highly regarded industry veteran, Ira has been recommended in securities litigation by The Legal 500, named a “Leading Plaintiff Financial Lawyer” by Lawdragon and been awarded an AV Preeminent rating, the highest distinction, from Martindale-Hubbell.

Ira is a longtime leader in the securities class action bar and represented one of the first institutional investors acting as a lead plaintiff in a post-Private Securities Litigation Reform Act case and ultimately obtained one of the first rulings interpreting the statute's intent provision in a manner favorable to investors in STI Classic Funds, et al. v. Bollinger Industries, Inc.  His efforts are regularly recognized by the courts, including in Kamarasy v. Coopers & Lybrand, where the court remarked on "the superior quality of the representation provided to the class."  In approving the settlement he achieved in In re InterMune Securities Litigation, the court complimented Ira's ability to secure a significant recovery for the class in a very efficient manner, shielding the class from prolonged litigation and substantial risk.

Ira has also played a key role in groundbreaking cases in the field of merger and derivative litigation.  In In re Freeport-McMoRan Copper & Gold Inc. Derivative Litigation, he achieved the second largest derivative settlement in the Delaware Court of Chancery history, a $153.75 million settlement with an unprecedented provision of direct payments to stockholders by means of a special dividend.  In another first-of-its-kind case, Ira was featured in The AmLaw Litigation Daily as Litigator of the Week for his work in In re El Paso Corporation Shareholder Litigation.  The action alleged breach of fiduciary duties in connection with a merger transaction, including specific reference to wrongdoing by a conflicted financial advisory consultant, and resulted in a $110 million recovery for a class of shareholders and a waiver by the consultant of its fee.

From 2009-2011, Ira served as President of the National Association of Shareholder and Consumer Attorneys (NASCAT), a membership organization of approximately 100 law firms that practice class action and complex civil litigation. During this time, he represented the plaintiffs' securities bar in meetings with members of Congress, the Administration, and the SEC.

From 1996 through 2012, Ira served as Chairman of the Class Action Committee of the Commercial and Federal Litigation Section of the New York State Bar Association.  During his tenure, he served on the Executive Committee of the Section and authored important papers on issues relating to class action procedure including revisions proposed by both houses of Congress and the Advisory Committee on Civil Procedure of the United States Judicial Conference.  Examples include "Proposed Changes in Federal Class Action Procedure," "Opting Out on Opting In," and "The Interstate Class Action Jurisdiction Act of 1999."  Ira has also lectured extensively on securities litigation at seminars throughout the country.