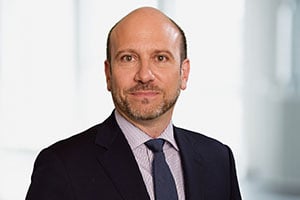 Gregory Asciolla is a Partner in the New York office of Labaton Sucharow LLP, where he serves as co-chair of the Firm's Antitrust and Competition Litigation Practice, a member of the Firm’s Executive Committee, and chair of the Firm’s Diversity & Inclusion Committee.  Greg focuses on representing businesses, public pension funds, and health and welfare funds in complex antitrust and commodities class actions.

Named a Titan of the Plaintiffs Bar by Law360 as well as a leading plaintiff’s competition lawyer by Global Competition Review and Chambers & Partners USA, Greg is often recognized for his experience and involvement in high-profile cases. He has been named one of the Leading Plaintiff Financial Lawyers in America by Lawdragon and a Leading Lawyer and a Next Generation Lawyer by The Legal 500, with sources describing him as "very effective plaintiffs' counsel" and "always act[ing] with a good degree of professionalism."  Noting, "Asciolla shines in representing both business and public pensions funds in antitrust as well as commodities class actions." As a result, Greg is also frequently sought after by the media, including The Wall Street Journal, The New York Times, Financial Times, CNN Business, and Global Competition Review, for commentary on global antitrust developments.

Prior to joining Labaton Sucharow, Greg practiced antitrust litigation and counseling on behalf of clients worldwide at Morgan Lewis & Bockius LLP and Schulte Roth & Zabel LLP.  He began his career as an attorney at the U.S. Department of Justice's Antitrust Division, where he focused on anticompetitive conduct in the healthcare industry.

Greg also makes substantial contributions to the antitrust bar.  In 2016, he was elected to the Executive Committee of the New York State Bar Association (NYSBA) Antitrust Law Section, where he formerly served as the Chairman of the Horizontal Restraints Committee.  He also currently serves as Co-Chairman of the Antitrust and Trade Regulation Committee of the New York County Lawyers' Association and Membership Chair of the Committee to Support the Antitrust Laws.  In addition, Greg serves as the U.S. representative in the Banking Litigation Network.

Greg regularly organizes and sits on panels and lectures discussing the latest developments and trends in antitrust law and frequently publishes work in national publications such as The National Law Journal, New York Law Journal, and Law360.  Additionally, he served on the Law360 Competition Editorial Advisory Board.