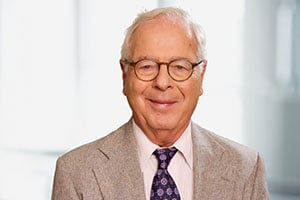 Edward Labaton is a Partner in the New York office of Labaton Sucharow LLP.  An accomplished trial and appellate lawyer, Ed has devoted his 50 years of practice to representing a full range of clients in class action and complex litigation matters in state and federal court.

Ed’s distinguished career has won his recognition from The National Law Journal as a “Plaintiffs’ Lawyer Trailblazer” and from Lawdragon one of the country’s “500 Leading Plaintiff Financial Lawyers,” as well as recommendations from The Legal 500 for excellence in the field of securities litigation.  Notably, Ed is the recipient of the Alliance for Justice’s “Champion of Justice Award," given to outstanding individuals whose life and work exemplifies the principle of equal justice.

Ed’s commitment to the bar extends far beyond the courtroom.  For more than 30 years, he has lectured on a variety of topics, including federal civil litigation, securities litigation, and corporate governance.  Since its founding, Ed has been President of the Institute for Law and Economic Policy, which co-sponsors symposia with major law schools to address issues relating to the civil justice system.  In 2010, he was appointed to the newly-formed Advisory Board of George Washington University’s Center for Law, Economics, & Finance, a think tank within the Law School, for the study and debate of major issues in economic and financial law confronting the United States and the globe.  In addition, Ed has served on the Executive Committee and has been an officer of the Ovarian Cancer Research Fund since its inception.