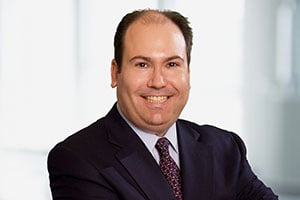 David J. Goldsmith is a partner in the New York office of Labaton Sucharow LLP.  A principal litigator at the Firm, David is responsible for the Firm’s appellate practice, and has briefed and argued multiple appeals in the federal Courts of Appeals and state appellate courts.  David has extensive experience representing public and private institutional investors in a variety of securities and class action litigations.

David was noted in Lawdragon as “…among the leading plaintiff financial lawyers nationwide,” and has twice been recommended by The Legal 500 as part of the Firm’s recognition as a top-tier plaintiffs firm in securities class action litigation.

David’s significant pending cases include federal appeals of dismissed actions against Molina Healthcare and Skechers U.S.A., and appeals by an intervenor challenging a landmark class action settlement with Endo Pharmaceuticals in state court.  In the Supreme Court of the United States, David acted as co-counsel for AARP and AARP Foundation as amici curiae in China Agritech, Inc. v. Resh, 138 S. Ct. 1800 (2018), and as co-counsel for a group of federal jurisdiction and securities law scholars as amici curiae in Cyan, Inc. v. Beaver County Employees Retirement Fund, 138 S. Ct. 1061 (2018).

As a trial lawyer, David was an integral member of the team representing the Arkansas Teacher Retirement System in a significant action alleging unfair and deceptive practices by State Street Bank in connection with foreign currency exchange trades executed for its custodial clients.  The resulting $300 million settlement is the largest class action settlement ever reached under the Massachusetts consumer protection statute, and one of the largest class action settlements reached in the First Circuit.  David also represented the New York State Common Retirement Fund and New York City pension funds as lead plaintiffs in the landmark In re Countrywide Financial Corp. Securities Litigation, which settled for $624 million.  He has successfully represented state and county pension funds in class actions in California state court arising from the IPOs of technology companies, and recovered tens of millions of dollars for a large German bank and a major Irish special-purpose vehicle in individual actions alleging fraud in connection with the sale of residential mortgage-backed securities.

David regularly advises the Genesee County (Michigan) Employees' Retirement Commission with respect to potential securities, shareholder, and antitrust claims, and represented the System in a major action charging a conspiracy by some of the world’s largest banks to manipulate the U.S. Dollar ISDAfix benchmark interest rate. This case, which settled for a total of $504.5 million, was featured in Law360’s selection of the Firm as a Class Action Group of the Year for 2017.

David earned his Juris Doctor from Benjamin N. Cardozo School of Law, Yeshiva University.  During law school, David was Managing Editor of the Cardozo Arts & Entertainment Law Journal and served as a judicial intern to the Honorable Michael B. Mukasey, then a United States District Judge for the Southern District of New York.  He received his bachelor’s and master’s degrees from the University of Pennsylvania.

David is an active member of several professional organizations, including The National Association of Shareholder & Consumer Attorneys (NASCAT), a membership organization of approximately 100 law firms that practice complex civil litigation including class actions, the American Association for Justice, New York State Bar Association, and the Association of the Bar of the City of New York.

David is a long-time tenor and board member with AmorArtis, a chamber chorus dedicated to illuminating the relationship between Renaissance, Baroque, and Contemporary music.