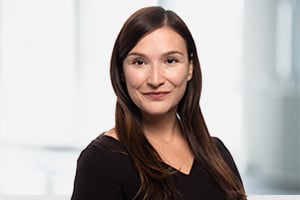 Carol C. Villegas is a Partner in the New York office of Labaton Sucharow LLP. Carol focuses on prosecuting complex securities fraud and consumer cases on behalf of institutional investors and individuals. Leading one of the Firm’s litigation teams, she is actively overseeing litigation against  Lordstown, Playtika, Oak Street Health, Churchill Capital Corp/Lucid Motors, Danske Bank, Flo Health, Amazon, and Hain. In addition to her litigation responsibilities, Carol holds a variety of leadership positions within the Firm, including serving on the Firm's Executive Committee, as Chair of the Firm's Women's Networking and Mentoring Initiative, and as the Chief of Compliance.

Carol’s development of innovative case theories in complex cases, her skillful handling of discovery work, and her adept ability during oral arguments has earned her accolades from Chambers & Partners USA, The National Law Journal as a Plaintiffs’ Trailblazer, and the New York Law Journal as a Top Woman in Law and a New York Trailblazer. The National Law Journal “Elite Trial Lawyers” has repeatedly recognized Carol’s superb ability to excel in high-stakes matters on behalf of plaintiffs and selected her to its class of Elite Women of the Plaintiffs Bar. She has also been recognized as a Future Star by Benchmark Litigation and a Next Generation Partner by The Legal 500, where clients praised her for helping them “better understand the process and how to value a case.” Lawdragon has named her one of the 500 Leading Lawyers in America, one of the country’s top Plaintiff Financial Lawyers, and Leading Plaintiff Consumer Lawyers and Crain's New York Business selected Carol to its list of Notable Women in Law. Euromoney’s Women in Business Law Awards has also shortlisted Carol as Securities Litigator of the Year and Chambers and Partners named Carol a finalist for Diversity & Inclusion: Outstanding Contribution. She has also been named a Distinguished Leader honoree by the New York Law Journal.

Notable recent successes include In re Nielsen Holdings PLC Securities Litigation ($73 million settlement) and City of Warren Police and Fire Retirement System v. World Wrestling Entertainment, Inc. ($39 million settlement). Carol has also played a pivotal role in securing favorable settlements for investors, including in cases against DeVry, a for-profit university; AMD, a multi-national semiconductor company; Liquidity Services, an online auction marketplace; Aeropostale, a leader in the international retail apparel industry; Vocera, a healthcare communications provider; and Prothena, a biopharmaceutical company, among others. Carol has also helped revive a securities class action against LifeLock after arguing an appeal before the Ninth Circuit. The case settled shortly thereafter.

Prior to joining Labaton Sucharow, Carol served as the Assistant District Attorney in the Supreme Court Bureau for the Richmond County District Attorney’s office, where she took several cases to trial.  She began her career as an Associate at King & Spalding LLP, where she worked as a federal litigator.

She is fluent in Spanish.