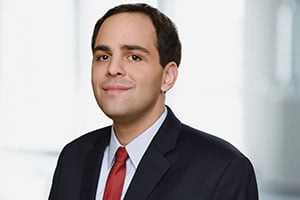 Aram joined Labaton Sucharow following a clerkship with the Honorable William M. Conley in the U.S. District Court for the Western District of Wisconsin.  Prior to that, he practiced at Boies Schiller Flexner LLP, where he handled a wide range of commercial litigation, including securities claims and derivative suits, as well as contract, real property, and tax litigation.

Active in the Firm’s pro bono efforts, Aram recently secured a grant of asylum for a political refugee.