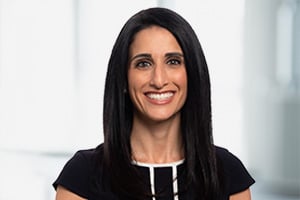 Melissa H. Nafash is Of Counsel in the New York office of Labaton Sucharow LLP and Co-Chair of the Firm’s ADR Practice. She represents over 250,000 clients in matters regarding data breaches, misuse of personal data, cryptocurrency, consumer finance, and personal banking litigation.

Highly regarded in her practice, The National Law Journal's "Elite Trial Lawyers" recognized Melissa as a Rising Star of the Plaintiffs Bar, The Best Lawyers in America® named her among the Ones to Watch in the Class Actions – Plaintiffs category, and Euromoney’s Women in Business Law Awards selected her as a finalist for its Litigation Rising Star award.  Melissa has also received the National Trial Lawyers’ Top 40 Under 40 Award, the New York Metro Area Outstanding Young Lawyer Award, and the New York Metro Area Top Young Women Attorneys Award, as well as the Super Lawyers’ Rising Star Award.

Prior to joining Labaton Sucharow, Melissa was a Senior Attorney at The Lanier Law Firm, where she was appointed to the plaintiffs’ steering committee in In Re: Davol/C.R. Bard Hernia Mesh Multi-Case Management and assisted in leading the litigation for more than 10,000 plaintiffs.  In addition, she managed several other litigations from onset through settlement.  Previously, Melissa was an Associate at Milberg LLP, where she oversaw three mass tort litigations, prepared two litigations for settlement, and negotiated settlement at multiple settlement conferences with defense counsel.

Melissa earned her Juris Doctor from Roger Williams University School of Law.  She received her bachelor’s degree from the University of Connecticut.