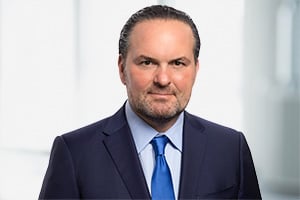 Garrett J. Bradley is Of Counsel to Labaton Sucharow LLP. Garrett has decades of experience helping institutional investors, public pension funds, and individual investors recover losses attributable to corporate fraud.  A former state prosecutor, Garrett has been involved in hundreds of securities fraud class action lawsuits that have, in aggregate, recouped hundreds of millions of dollars for investors.  Garrett’s past and present clients include some of the country’s largest public pension funds and institutional investors.

Garrett has been consistently named a “Super Lawyer” in securities litigation by Super Lawyers, a Thomson Reuters publication, and was previously named a “Rising Star.”  He was selected as one of “New England's 2020 Top Rated Lawyers” by ALM Media and Martindale-Hubbell.  The American Trial Lawyers Association has named him one of the “Top 100 Trial Lawyers in Massachusetts.”  The Massachusetts Academy of Trial Attorneys gave him their “Legislator of the Year Award,” and the Massachusetts Bar Association named him “Legislator of the Year.”

Prior to joining the firm, Garrett worked as an Assistant District Attorney in the Plymouth County District Attorney’s office.  He also served in the Massachusetts House of Representatives, representing the Third Plymouth District, for sixteen years.

Garrett is a Fellow of the Litigation Counsel of America, an invitation-only society of trial lawyers comprised of less than 1/2 of 1% of American lawyers.  He is also a member of the Public Justice Foundation and the Million Dollar Advocates Forum.