Not only did we obtain $457 million settlement at the time, one of the largest securities class action recoveries in history, but we also secured substantial corporate governance reforms.

On November 7, 2001, lead plaintiff Connecticut Retirement Plans and Trust Funds achieved an extraordinary $457 million settlement on behalf of persons and entities that purchased Waste Management, Inc. (WMI) securities between June 11, 1998 and November 9, 1999. The settlement, which at the time was the third-largest securities fraud settlement ever recorded, and which also included an array of substantial measures aimed at improving WMI's corporate governance, was achieved through the direct participation of Connecticut Treasurer Denise L. Nappier and Connecticut Attorney General Richard Blumenthal. Labaton Sucharow represented Connecticut and the class.

The claims administrator mailed the second distribution of checks to class members on October 14, 2008. 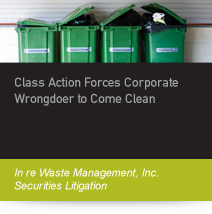