This securities class action resulted in a combined settlement of $78 million.

This securities class action was commenced in June 1998 against three groups of defendants: (1) Vesta Insurance Group, Inc. (Vesta) and certain of its officers and directors; (2) KPMG Peat Marwick, LLP (KPMG), Vesta's outside auditor; and (3) Torchmark Corporation (Torchmark), the former parent company of Vesta.

The plaintiffs alleged that from the time it became a public company in 1993 until mid-1998, Vesta issued false financial statements to the public. In August 1998, Vesta restated its financials by approximately $65 million due to accounting irregularities and errors.

Following extensive discovery, plaintiffs settled with Vesta in 2001 for $61 million and with KPMG in 2002 for $17 million. Those settlement funds were distributed to the class members in 2003.

Torchmark was the remaining defendant. Plaintiffs alleged that Torchmark is liable under the securities law as a "control" person of Vesta.

On July 3, 2008, the court, in response to a motion filed by Torchmark, ruled that members of the class who purchased or acquired Vesta stock during the period from June 2, 1998 through June 28, 1998, inclusive, should no longer be members of the class. A copy of the court's Memorandum Opinion and Order, which was entered on July 22, 2008, can be obtained by clicking on the link to the right.

The trial against Torchmark was scheduled to begin on September 8, 2008 in Birmingham, Alabama. However, on the eve of trial, the parties reached an agreement to settle the case for $1,950,000. A copy of the Stipulation of Settlement, dated September 15, 2008, can be obtained by clicking on the link to the right. 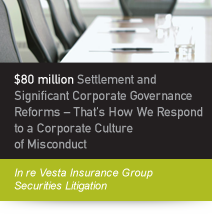