On September 30, 2011, the Honorable John L. Kane of the United States District Court for the District of Colorado granted final approval to a settlement in the amount of $52.5 million in the class action In re Oppenheimer Champion Fund Securities Fraud Class Actions, No. 09-cv-525-JLK-KMT. Labaton Sucharow is Court-appointed lead counsel for lead plaintiffs Errol Glynn O'Steen and Thomas Goodman and the proposed class.

The class alleged that various Oppenheimer entities and certain individual defendants made materially false or misleading statements and omissions to the investing public regarding the investment profile and objectives of the Oppenheimer Champion Income Fund (the Champion Income Fund) in violation of Sections 11, 12(a)(2), and 15 of the 1933 Act, which had the effect of artificially inflating the price of Core Bond Fund shares. 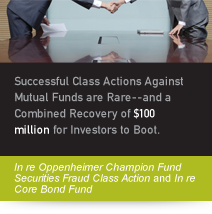