In re Natural Gas Commodity Litigation

Labaton Sucharow served as co-lead counsel in the recently-settled case In re Natural Gas Commodity Litigation, which involved manipulation by dozens of large energy companies of the price of natural gas futures contracts traded on the New York Mercantile Exchange (NYMEX).

Labaton Sucharow served as co-lead counsel in the In re Natural Gas Commodity Litigation, which involved manipulation by dozens of large energy companies of the price of natural gas futures contracts traded on the New York Mercantile Exchange (NYMEX). On June 15, 2007, Judge Victor Marrero of the Southern District of New York granted the parties' Final Judgment and Order of Dismissal and approved settlements with the five remaining defendants for over $28 million. This followed his May 24, 2006, Final Judgment and Order of Dismissal approving settlements for more than $72 million against 17 defendants. The total settlement obtained in this complex litigation-almost $101 million-is the second largest class action recovery in the 85-year history of the Commodity Exchange Act.

Plaintiffs alleged that over twenty defendants, among them the largest energy companies in the United States, including El Paso Merchant Energy L.P., Reliant Energy Services Inc., AEP Energy Services, Inc., Aquila Energy Marketing corp., Dynegy Marketing and Trade, CMS, Coral Energy Resources, LP, Williams Companies, Inc., and E-Prime, Inc., manipulated the price of natural gas by engaging in false reports of the price and volume of their trades to sources that publish indices of natural gas information about the market. In addition, plaintiffs alleged that several of these defendants engaged in wash trading, churning, and other market gaming strategies, which created the illusion of false liquidity in the market, and further manipulated the price of natural gas.

Labaton Sucharow won significant victories throughout litigation including: prevailing on a motion to enforce subpoenas issued by two publishers of natural gas price indices for the production of trade report data, as well as a decision certifying a class of futures traders who were harmed by defendants' manipulation of the price of natural gas futures contracts traded on the New York Mercantile Exchange (NYMEX) from January 1, 2000 to December 31, 2002. 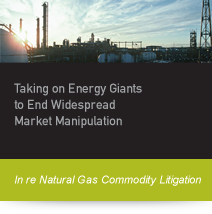