As co-lead counsel in a case against automotive giant, General Motors, and its auditor, we obtained a settlement of more than $300 million, one of the largest settlements ever secured in the early stages of a securities fraud case.

On July 21, 2008, General Motors and its outside auditor, Deloitte & Touche LLP, agreed to pay a total of $303 million to settle the securities fraud lawsuit litigated by Labaton Sucharow and other attorneys on behalf of a class of investors who purchased GM securities during the period between April 13, 2000, and March 30, 2006, inclusive. Of the $303 million settlement, General Motors agreed to pay $277 million, and Deloitte, $26 million.

The case was filed in September 2005, and, subsequently, two of Europe's leading pension funds, Deka Investment GmbH, and Deka International S.A., Luxembourg, were appointed, together, to be lead plaintiff.

The Complaint alleges that, over a period of six years, General Motors, its officers and its outside auditor overstated GM's income by billions of dollars, and GM's operating cash flows by tens of billions of dollars, by a series of accounting manipulations that included, among other things, prematurely recognizing income from supplier rebates, misclassifying cash flow as operating rather than investing cash flow, and omitting to disclose the nature and amount of GM's guarantee of pension benefits owing to workers at GM's former parts division, now an independent corporation in Chapter 11 bankruptcy protection, Delphi, Corp.

Following the briefing of defendants' motions to dismiss, and without having first determined those motions, Judge Gerald E. Rosen, of the Eastern District of Michigan, sent the case to mediation, where Labaton Sucharow was co-lead counsel for investors, along with Grant & Eisenhofer P.A. The settlement fund obtained for investors as a result of the mediation is one of the largest ever achieved at such an early point in a securities fraud case.

The settlement was formalized in a Stipulation and Agreement of Settlement signed by the parties on September 16, 2008, and was preliminarily approved by the District Court on September 23, 2008, which at that time authorized notice to be sent to the class and set December 22, 2008 as the date of the Final Hearing. After the December 22, 2008 hearing and a supplemental fairness hearing on January 6, 2009, the Court granted final approval of the settlement on January 6, 2009. The settlement has been distributed.

The settlement is different from the one recently reached in New York State Teachers' Retirement System v. General Motors Company, Index No. 14-11191 (E.D. Mich). For information about that new settlement, please visit www.gmsecuritieslitigation.com. 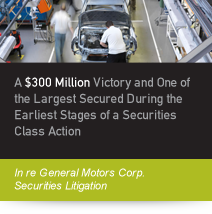 Notice of Proposed Settlement, Motion for Attorneys' Fees and Reimbursement of Expenses and Fairness Hearing

Order for Preliminary Approval and for Notice and Hearing