After four years of intense litigation, including a five-week trial in federal court and six days of jury deliberations, we secured a unanimous verdict and a $185 million jury award.

In 2002, following four years of intense litigation, the investors achieved total victory after a five-week federal trial and six days of jury deliberations. The jury reached an unanimous verdict for the plaintiffs on liability and damages. Finding that the defendants violated federal proxy laws, the jury determined that the Solicitation Statements were materially false and misleading. The jury verdict exceeded $185 million, which included more than $92 million in compensatory damages and more than $92 million in punitive damages. The punitive damage award was later reduced by the court to $2.2 million, which represented 10 percent of the corporate defendants' net worth—the maximum punitive damage award allowable under California law. The action was settled following the defendants' appeal of the jury verdict. The final settlement figure of $83 million represented 118 percent of the total damages claimed.

This landmark case was the first securities class action to be tried to a successful jury verdict in the United States since the enactment of the Private Securities Litigation Reform Act (PSLRA) of 1995. 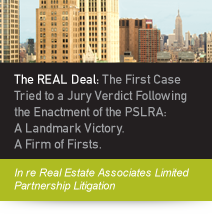