We obtained a $47.5 million settlement in this stock options backdating litigation.

On November 25, 2008, the Honorable Jed Rakoff of the United States District Court for the Southern District of New York approved a $47.5 million settlement in the certified class action In re Monster Worldwide, Inc. Securities Litigation, No. 07-CV-02237 (S.D.N.Y.), on behalf of investors who purchased or acquired common stock or options of Monster Worldwide, Inc. ("Monster") between May 6, 2005 and June 9, 2006. The deadline for filing a Proof of Claim was January 5, 2009. The Court approved the distribution of the settlement to eligible claimants on August 19, 2009 and checks have been mailed.

The Class alleged that defendants engaged in a long-running scheme to backdate Monster's stock option grants to attract and retain employees without recording the resulting compensation expenses. This scheme allegedly violated Generally Accepted Accounting Principles and Monster's own stated accounting policies and rendered its publicly filed financial statements and periodic reports to the Securities and Exchange Commission materially false and misleading.

A copy of the Notice of Pendency of Class Action and Proposed Settlement, Proof of Claim form, and the Final Order and Judgment can be accessed by clicking on the links to the right. 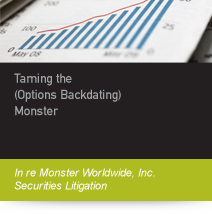 Notice of Pendency of Class Action and Proposed Settlement