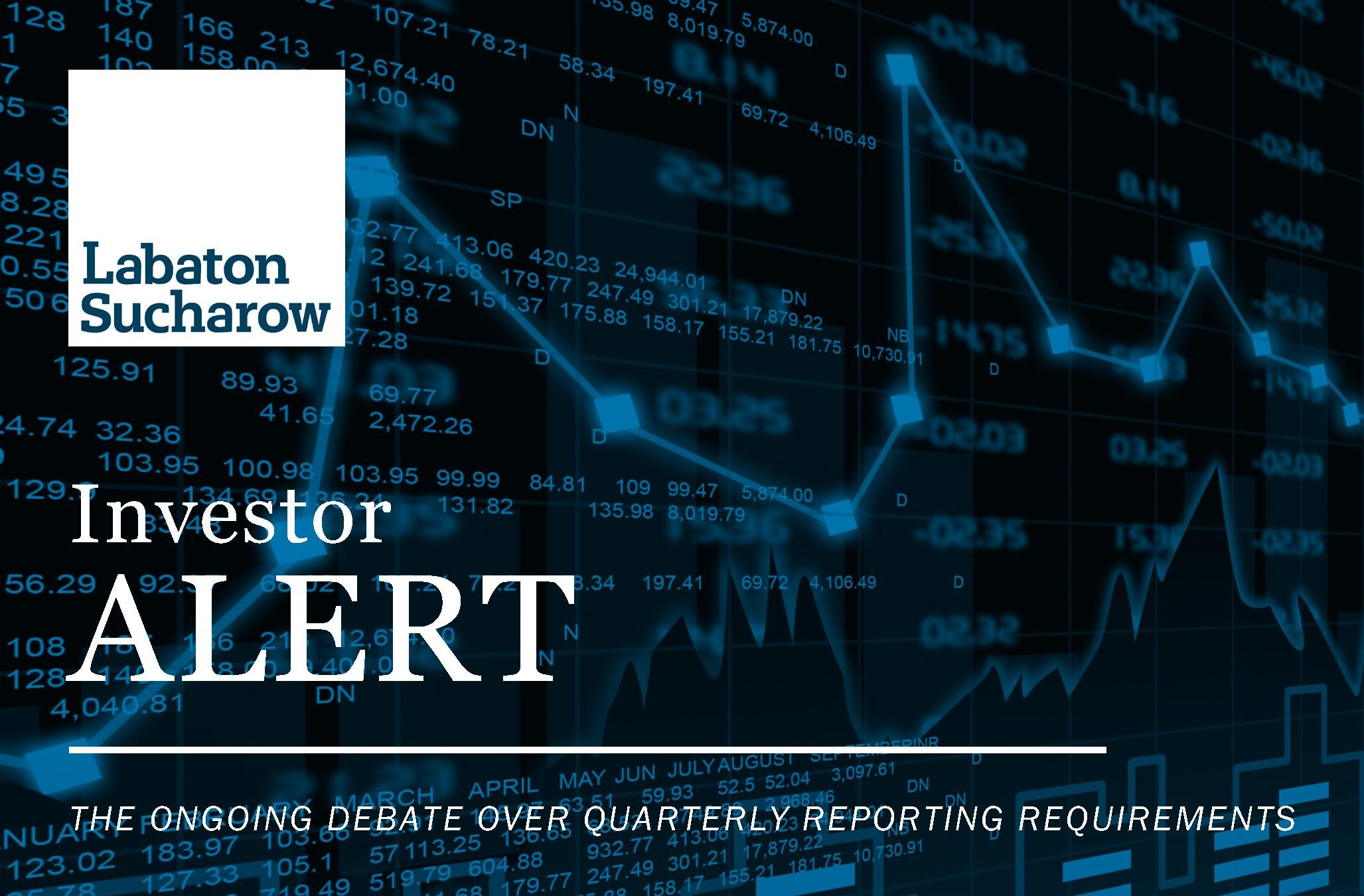 Federal law requires public companies to disclose their financial results each quarter in filings with the U.S. Securities Exchange Commission (the “SEC”).1 Because these quarterly reports contain key financial metrics and provide detailed information about the financial health of a company, investors and investment managers rely heavily on them to inform investment decisions.
Quarterly reporting promotes transparency, allowing investors to make informed investment decisions. But, in recent years, some market participants and commentators have begun to question the value of the practice, arguing that quarterly reporting distracts companies from focusing on long-term growth, forcing executives to instead consistently prioritize short-term quarterly earnings results. Criticism from some grew loud enough that, in 2018, President Donald J. Trump called on the SEC to study whether financial reporting should become less frequent—and the SEC has sought public comment to help evaluate whether changes to the current practice are necessary. While the comments received do not appear to indicate widespread support for changing the frequency of quarterly reporting, they do indicate support for modifying certain elements of the practice. Investors should continue to monitor this ongoing debate, as any changes to quarterly reporting requirements will impact the availability of information on which investment decisions are made.

Commentators Have Debated for Years the Value of Quarterly Reporting

The passage of the Securities Exchange Act of 1934 empowered the SEC to require the periodic reporting of publicly traded companies, although no formalized reporting schedule was established.2 The SEC began to require semi-annual reporting in 1955—and in 1970, the SEC mandated quarterly reporting for all publicly traded U.S. companies.3 The purpose of quarterly-reporting requirements have been to increase transparency, and Congress updated these requirements in the wake of major public scandals, such as the Enron fraud, to bolster investor confidence when it passed Sarbanes-Oxley Act of 2002, requiring top-level management, specifically the CEO and CFO, to sign off on all major corporate disclosures, including quarterly reports.4

For years, commentators have questioned the value of quarterly reporting. Many suggest that quarterly reporting forces companies to focus too heavily on short-term results at the expense of long-term growth.5 For example,
prominent law firm Wachtell, Lipton, Rosen & Katz—a frequent critic of quarterly reporting, who called on the SEC in 2015 to end the practice6 —noted during the 2018 Harvard Law School Forum on Corporate Governance that “quarterly reporting consumes substantial time and expense and imposes opportunity costs, as management teams focus on quarterly results.”7

Criticism of quarterly reporting has bipartisan support. During a campaign speech in 2015, then presidential-candidate Hillary Clinton discussed what she referred to as “quarterly capitalism,” arguing that there is too great an emphasis on “the next earnings report or the short-term share price,” which results in “too little attention [to] . . . the sources of long-term growth: research and development, physical capital and talent.”8 While Clinton did not explicitly call for an end to quarterly reporting, instead proposing a modification to the capital-gains tax as the more appropriate fix9, her remarks highlighted a growing consensus on Wall Street that companies are too preoccupied with short-term financial reporting.10

Other market commentators and academics are not so sure that doing away with quarterly reporting is a viable solution, explaining that frequent reporting provides valuable information for investors.11 Academics have noted that this increased transparency lowers the cost of capital for companies, because it allows investors to better understand the risks associated with companies, and thus expect a lower required return on equity.12 Proponents of the practice also point out that many blue-chip tech companies, for instance, “command colossal valuations” despite low profits, which is not “what you’d expect from a market dominated by short-term considerations.”13

SEC Seeks Public Comment on the Timing of Earnings Releases

In August 2018, President Donald J. Trump inserted himself into the debate, tweeting that he had “asked the SEC to study” the need for quarterly reporting requirements, suggesting that regulators should consider “going to a six month system.”14

At President Trump’s request, the SEC announced that it would explore a possible change to quarterly reporting requirements.15 In December 2018, the SEC issued a release announcing that it “published a request for comment soliciting input on the nature, content, and timing of earnings releases and quarterly reports.”16 The release quoted SEC Chairman Jay Clayton, who highlighted “the ongoing debate regarding the effects of mandated quarterly reports and the prevalence of optional quarterly guidance”:

Our markets thirst for high-quality, timely information regarding company performance and material corporate events. We recognize the importance of this information to well-functioning and fair capital markets. We also recognize the need for companies and investors to plan for the long term. Our rules should reflect these realities. I look forward to receiving thoughtful comments as we think about ways to encourage long-term investment in our country.17

The public comments the SEC has received thus far reveal that—despite the ongoing debate highlighted above—“investors, companies and auditors largely supported the status quo.”18 While some commentators have called for less frequent reporting19, many instead propose maintaining quarterly reporting but easing the burden (e.g., the amount of paperwork) associated with quarterly reports.20 For example, national law firm Clearly Gottlieb Steen & Hamilton—which represents many corporate issuers—explained that “we do not think the Commission should revisit the frequency of interim reporting or the auditor’s review of interim financial statements,” but should instead “focus its regulatory energies on reducing the burdens of Form 10-Q where that can be done without weakening investor protections.”21

Investors Should Continue to Monitor this Issue

The SEC has received public comment on this issue as recently as October 2020.22 It remains to be seen what, if anything, the SEC will do in response to the public comments, and it is also unclear how things might be impacted by a new Presidential administration, when President-elect Joe Biden takes office in January 2020. Current SEC Chairman Jay Clayton announced in November 2020 that he will step down from his post at the end of the year.
It remains to be seen who President-elect Joe Biden will name to replace Clayton. Reports have suggested that potential successors include Gary Gensler, who led the Commodity Futures Trading Commission under President Barack Obama, or Preet Bharara, the former U.S. Attorney for the Southern District of New York23 —although it is not readily apparent where either stands on the issue of quarterly reporting. Regardless, because quarterly reporting promotes transparency and helps investors make informed investment decisions, it is worth monitoring any potential changes that might be made to the quarterly reporting system.