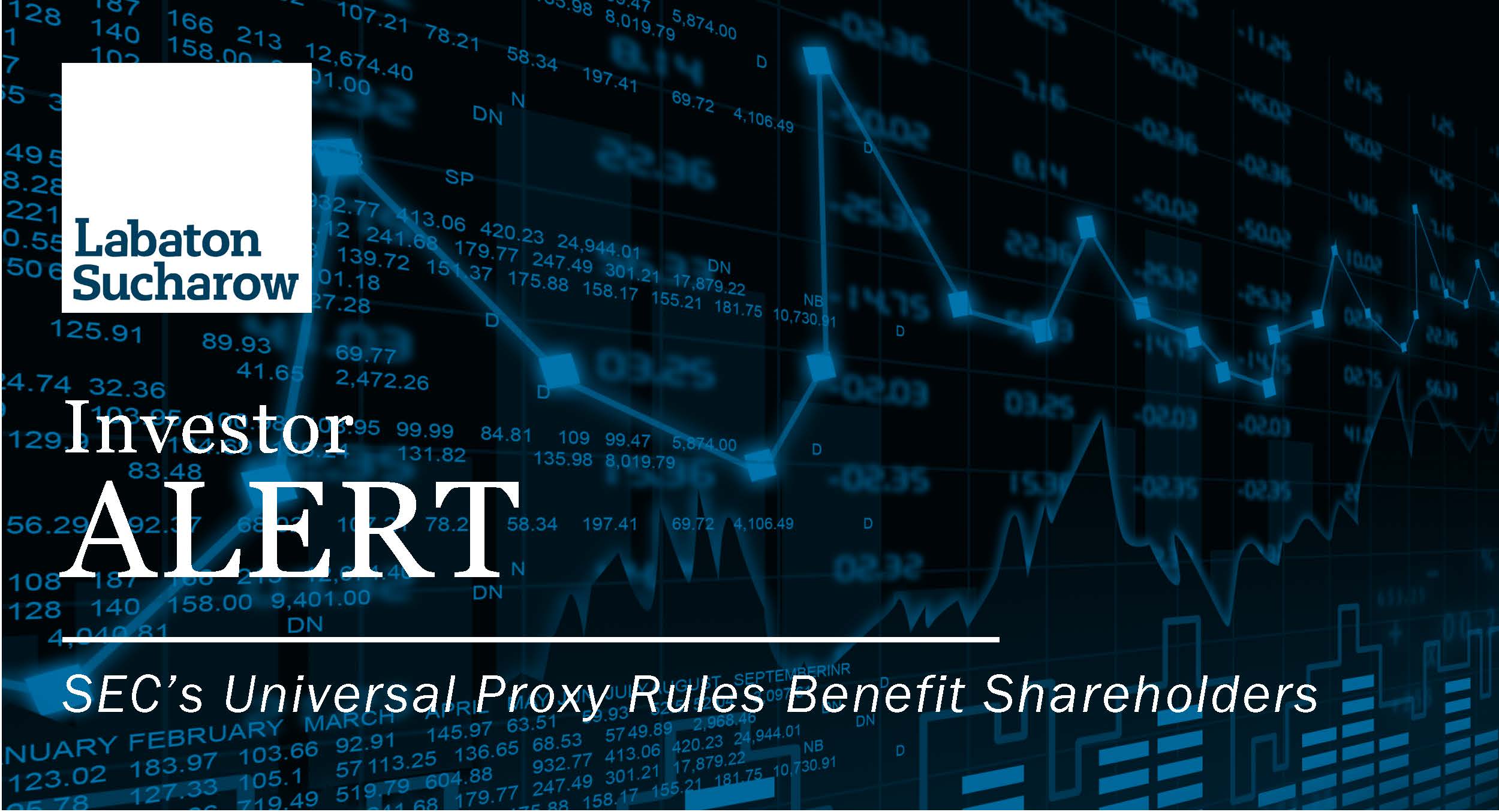 On November 17, 2021, the U.S. Securities and Exchange Commission (“SEC”) adopted Rule 14a-19, which will provide shareholders with a more significant voice in electing companies’ boards of directors—one of the fundamental aspects of corporate governance that is critical to holding directors accountable to shareholders.1  By way of background, a company’s board of directors is determined by its shareholders.  If there are more candidates than there are available seats, the company’s shareholders have the opportunity to vote for the candidates that they think should have seats.  In a contested director election such as this, there are typically two competing slates of director nominees: (1) a “registrant slate” assembled by the board of directors; and (2) a “dissident slate” assembled by dissident shareholders.

Rule 14a-19 Improves the Proxy Process for Investors

Additionally, Rule 14a-19 will require the dissident to solicit holders of shares representing at least 67% of the voting power of shares entitled to vote on the election of directors, indicating a significant change from the current rules, which do not require a dissident to solicit any minimum number of shareholders.8  This higher threshold requirement ensures a proper balance between achieving the benefits of the Universal Proxy Card for shareholders and preventing dissidents from taking advantage by including dissident nominees on the registrant’s universal proxy card without undertaking meaningful solicitation efforts.9

Moreover, while Rule 14a-19 has a minimum solicitation threshold requirement, it does not mandate any minimum ownership threshold or holding period.  That is, for a dissident shareholder to organize a slate of director nominees on a Universal Proxy Card, there are no universal proxy requirements concerning the size of that dissident’s equity stake in a registrant or the period of time it has maintained its equity position.10

The SEC indicated that these new universal proxy rules will apply to all shareholder meetings involving contested director elections held after August 31, 2022.11

The SEC’s adoption of Rule 14a-19 is a win for both institutional and retail investors.  Under the existing rules institutional investors do have the ability to arrange for a representative to attend shareholder meetings in person, thus allowing them to split their vote between a registrant slate and a dissident slate; however, to do so requires considerable effort and expense.12  With respect to retail and other smaller investors, they are less likely to have either the resources or the ability to send someone to the meetings, leaving them with no option to split their votes. The Universal Proxy Card will eliminate these hurdles for investors.  Indeed, since institutional investors are more likely than other shareholders to split their votes between the two slates, Rule 14a-19 will allow institutional investors to do so more easily while also saving costs.13  For retail investors who do not normally expend the cost to attend shareholder meetings, Rule 14a-19 may not result in a large cost-savings, but it will allow them to cast votes that more accurately reflect their voting preferences.14
Furthermore, the new 67% minimum solicitation threshold represents a significant step towards pushing dissidents to engage with more shareholders, even smaller ones.15  Indeed, the increase in the dissident minimum solicitation requirement was intended to mitigate concerns over dissidents ignoring retail investors with small holdings.16  Since the new rule requires the registrant’s proxy card to also identify the dissidents’ director nominees, even the shareholders who are not solicited by dissidents will receive notification of the dissidents’ director nominees and have the ability to access information about those nominees before casting their votes.17
Similarly, Rule 14a-19’s lack of any ownership requirements benefits shareholders of all sizes and will make it easier for activist investors to further advocate for their causes.  For example, dissidents need not meet any minimum ownership threshold or minimum holding period to form their own director nominee slates on the Universal Proxy Card.  As such, dissidents could own one share for one day and still put forth their own slate of director nominees.  In fact, SEC Commissioner Hester M. Peirce dissented to adopting Rule 14a-19 for this very reason.  In her Dissenting Statement on Universal Proxy, Commissioner Peirce explained that because the “rule does not condition access to the company’s proxy card on a demonstrated commitment to the company,” “[a]ny non-shareholder looking to further any cause can buy a share just before putting up a director candidate” (or threaten to buy a share) to gain enough leverage to negotiate with management in furtherance of that potential dissident’s cause.18 Commissioner Peirce reasoned that such a situation has the potential to distract managers from important company business.19
Notwithstanding Commissioner Peirce’s concerns, the SEC determined that requiring such minimum ownership thresholds or holding periods under the universal proxy rules would be contrary to the Universal Proxy Card’s objective of allowing shareholders to elect their preferred candidates through the proxy process.20  Thus, activist investors, despite a lack of demonstrated commitment to the company—and institutional and retail investors of all sizes—have the ability to take advantage of the Universal Proxy Card and more easily gain control of seats on companies’ boards of directors.
Rule 14a-19 thus expands significant rights for shareholders.  Indeed, Rule 14a-19 is consistent with the fact that the proxy rules “stemmed from a congressional belief that ‘[f]air corporate suffrage is an important right that should attach to every equity security bought on a public exchange’” and that such rules were “intended to promote ‘the free exercise of the voting rights of stockholders.”21  As SEC Chair Gary Gensler stated, Rule 14a-19 “will put investors voting in person and by proxy on equal footing.  This is an important aspect of shareholder democracy.”22 Accordingly, while some commenters expect that the new rule will increase the amount of proxy contest threats, the Universal Proxy Card ultimately confers substantially more rights on institutional, retail, and activist investors.

4As the Council of Institutional Investors stated, “Imagine if, in a political election, you could vote only for Democrats or only for Republicans[.] ‘That has been the dilemma facing most investors voting in a proxy contest at U.S. companies.’” Press Release, Leading Investor Group Hails SEC Rule Requiring Universal Proxy Cards in Contests for Board Seats (Nov. 17, 2021).

10Id. at 18. Rule 14a-19 also contains requirements concerning notice, disclosure, presentation, formatting, filing deadlines, and more. See, generally, Universal Proxy Final Rule 14a-19. For example, the rule requires that the font type, style, and size be consistent for all nominees presented on the Universal Proxy Card to avoid concerns about emphasizing certain nominees over others and to ensure clarity and fairness in presentation. Id. at 54.