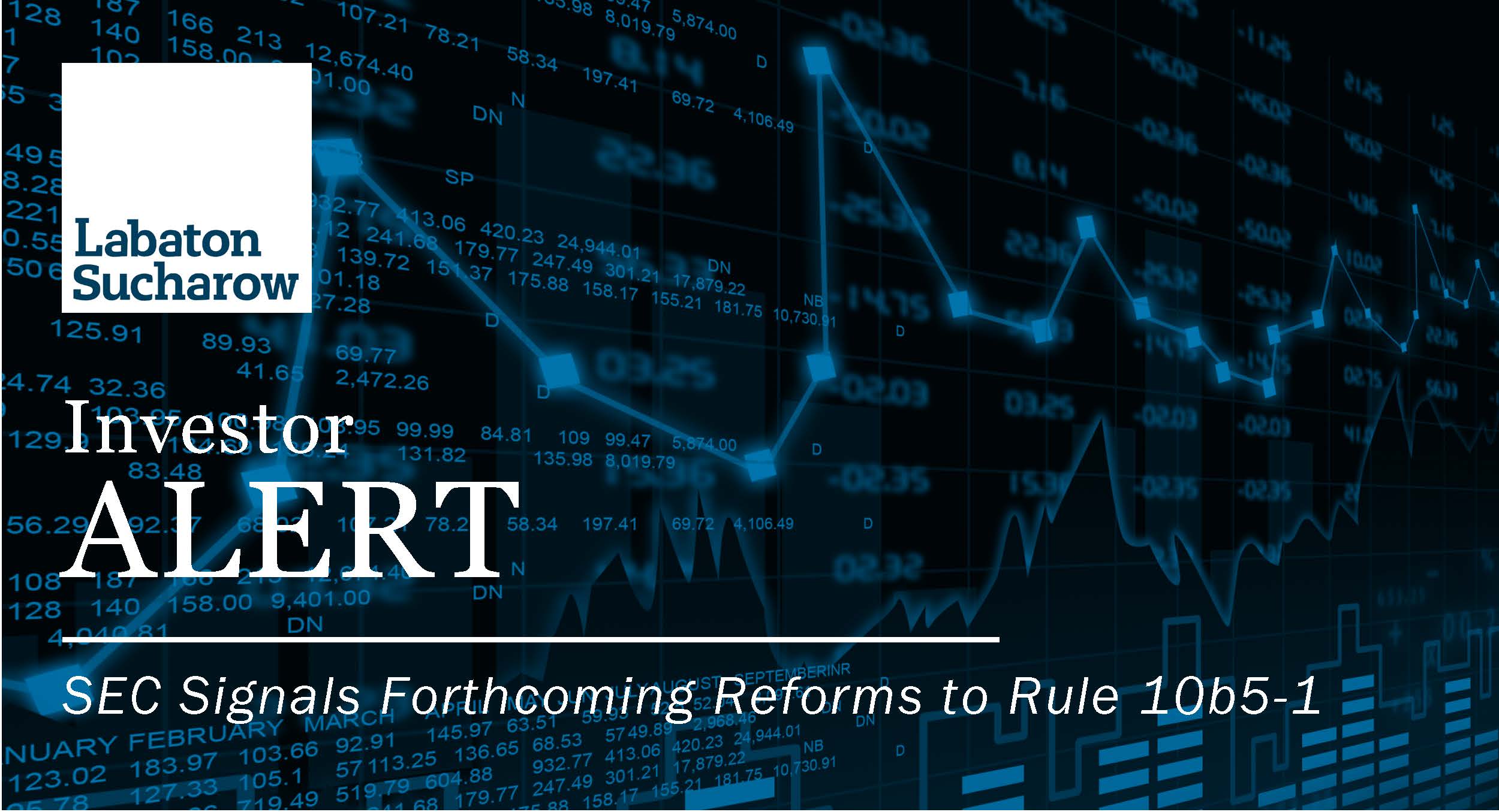 Rule 10b5-1 allows company insiders to trade while in possession of material non-public information (“MNPI”) so long as it is in accordance with a predefined trading plan. Recently, SEC Chair Gary Gensler asked his staff to recommend changes to Rule 10b5-1, in order to address “real cracks” in the Commission’s insider trading regime.1 In response, a subcommittee of the SEC’s Investor Advisory Committee (“IAC”) released draft recommendations addressing most of Chair Gensler’s concerns related to abuses of the rule. On September 9, 2021, the draft recommendations were approved by the IAC. These recommended changes provide investors with valuable insight into the SEC’s considerations moving forward for potential Rule 10b5-1 modifications. As discussed further below, these reforms include a new four-month “cooling off” period between the adoption of a new 10b5-1 plan and when trading can begin, a prohibition on an individual having multiple plans in place at one time, and a number of new reporting requirements. If adopted, these proposed reforms will help curb many of the Rule 10b5-1 abuses that Chair Gensler identified.

Section 10(b) of the Securities Exchange Act of 1934 (the “Exchange Act”) and the associated Rule 10b-5 prohibit the use of manipulative and deceptive devices in trading securities. Rule 10b5-1 defines when the purchase or sale of securities made “on the basis of” MNPI constitutes insider trading. The rule specifies that a transaction is made on the basis on MNPI “if the person making the purchase or sale was aware” of the MNPI “when the person made the purchase or sale.”2 Because company insiders often possess MNPI about the company, the SEC adopted Rule 10b5-1 to provide insiders and companies with an affirmative defense against insider trading when trading securities for legitimate purposes. To qualify for this affirmative defense, insiders must establish a Rule 10b5-1 plan (i.e., a contract, instruction, or plan that satisfies the rule’s requirements) in good faith before becoming aware of MNPI. An insider that satisfies this criterion is entitled to the affirmative defense even if the insider becomes aware of MNPI at a later time (e.g., when the 10b5-1 plan trades are executed).

Loopholes and Associated Abuses to Rule 10b5-1 Plans

Despite the good intentions justifying the adoption of the rule, Rule 10b5-1 creates loopholes that have allowed opportunistic insiders to shield their trades from regulatory scrutiny. There are various ways an insider can abuse the rule, including strategically implementing, modifying, and canceling Rule 10b5-1 plans in advance of public disclosures containing material information. While an insider is prohibited from implementing or modifying a Rule 10b5-1 plan when aware of MNPI, there is no requirement to report the implementation or modification of a plan—allowing many insiders to escape regulatory scrutiny altogether. Further, SEC guidance effectively permits insiders to cancel Rule 10b5-1 plans while in possession of MNPI because the termination of a plan technically does not constitute a securities transaction (i.e., the purchase or sale of a security).3
Academic studies confirm that insiders have engaged in, at the very least, some level of strategic trading through Rule 10b5-1 plans.4 Most recently, an examination of a dataset containing over 20,000 Rule 10b5-1 plans, including respective adoption dates and trades, revealed three “red flags” associated with the use of such plans: (1) plans with short “cooling-off periods;”5 (2) plans that entail only a single trade; and (3) plans adopted in a given quarter that begin trading before that quarter’s earnings announcement.6 Ultimately, this examination found that a subset of insiders engaged in opportunistic, large-scale selling of company shares—enabling them to avoid significant losses.7

On June 7, 2021, in prepared remarks for the CFO Network Summit, Chair Gensler expressed concerns about certain abuses associated with Rule 10b5-1 and asked his staff to provide recommendations on how the SEC might be able to “freshen up” the rule.8 In doing so, Chair Gensler identified five specific areas for reform:

On August 26, 2021, the Investor as Owner Subcommittee of the IAC issued draft recommendations addressed to the SEC.9 The draft recommended that the Commission take six actions to address Rule 10b5-1 abuses.

The remaining recommendations advised the SEC to adopt new reporting and disclosure requirements:

Notably, none of these recommendations addressed Chair Gensler’s concerns regarding the cancellation of Rule 10b5-1 plans or the rule’s intersection with share buybacks. On September 9, 2021,10 in prepared remarks before the IAC, Chair Gensler noted that these recommendations “pointed out some important areas” that the Commission will consider in proposed rulemaking.11 However, Chair Gensler did not foreclose the possibility of proposing additional Rule 10b5-1 reforms to curb associated abuses.

The SEC’s unified agenda lists Rule 10b5-1 reforms as a regulatory action that the agency plans to take.12 We expect the SEC to issue a rulemaking proposal in early 2022.

3SEC Exchange Act Rules, “Questions and Answers of General Applicability,” specifically Questions 120.17 & 120.18, (stating that, standing alone, termination of a plan does not result in liability under Rule 10b-5, although alteration of a plan can eliminate the Rule 10b5-1(c) defense for prior transactions, if any, under the plan).

5The term “cooling-off period” refers to the elapsed time between plan adoption and the date of the first planned trade.

9Draft Recommendation of the Investor as Owner Subcommittee of the SEC Investor Advisory Comm. Regarding Rule 10b5-1 Plans (Aug. 6, 2021).

10On the same day, the IAC approved the draft recommendations.