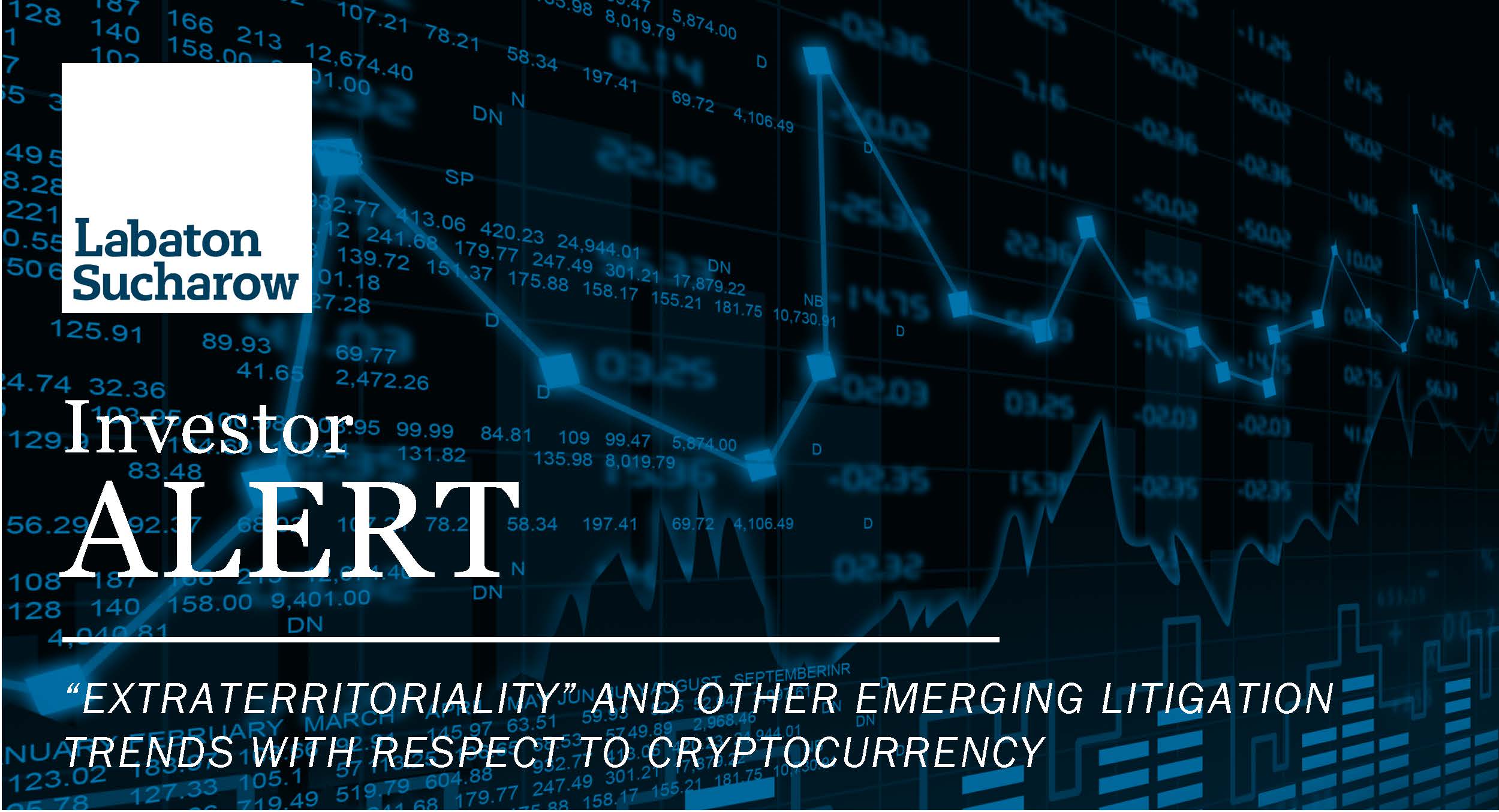 Investor Alert: “Extraterritoriality” and Other Emerging Litigation Trends with Respect to Cryptocurrency

In recent years, as investments in cryptocurrency have surged and public sales known as “coin offerings” have become more frequent, cryptocurrencies have become an integral part of a diversified portfolio for many institutional and retail investors.1 However, investors attempting to recover damages for misrepresentations in connection with those investments have faced a series of hurdles in litigating their claims. One of the most significant has been establishing that the particular cryptocurrency at issue falls within the federal securities laws’ definition of a “security,” an issue rarely in dispute for claims based on traditional investments such as stocks or bonds.

Similarly, a new trend has begun to emerge, further complicating litigation in this area. Seizing upon Supreme Court precedent establishing that the federal securities laws apply only to domestic transactions, i.e., those that occur within the United States, companies selling cryptocurrency have begun to structure their offerings so that they take place solely outside the U.S. and have added provisions to the sale ostensibly barring the participation of U.S.-based investors. As a result, these offerings are effectively shielded from the reach of the federal securities laws and the United States Securities and Exchange Commission (“SEC”). In many instances, however, these terms and conditions are illusory, and U.S.-based investors are able to, and often encouraged to, participate in the offering.

In such a situation, investors who are damaged as a result of fraud in connection with the offering may be left without a remedy, as companies attempt to hide behind the formal structure of the offering to evade liability under Section 10(b) of the Exchange Act of 1934 (the “Exchange Act”). This Investor Alert explores a recent decision by the Second Circuit, which provides some guidance as to how courts may treat these issues going forward.

Morrison and the Domestic Transaction Requirement

The Supreme Court first articulated the domestic transaction requirement in Morrison v. Nat'l Austl. Bank Ltd., holding that Section 10(b) applies only to domestic securities transactions.2 As the Court explained, “the focus of the Exchange Act is not upon the place where the deception originated, but upon purchases and sales of securities in the United States” and thus Section 10(b) applies “only [to] transactions in securities listed on domestic exchanges, and domestic transactions in other securities[.]”3 This requirement presents unique issues when applied to investments in cryptocurrencies, which are not traded on exchanges and are inherently decentralized and facilitated exclusively through the use of the internet.4 Indeed, the central feature of cryptocurrencies is a blockchain, or “a global network of decentralized ledgers or ‘nodes,’ which must jointly agree to cause the coin to transfer from one owner's address to another on the blockchain[.]”5 As these nodes are spread around the world, it can be extremely difficult for investors to establish exactly where a particular transaction in cryptocurrency took place, leading to potentially inconsistent applications of Morrison.

In Barron v. HelBiz Inc., the District Court for the Southern District of New York confronted exactly this problem.6 There, plaintiffs brought a class action based on a series of state law claims seeking to recover damages as a result of alleged misrepresentations in connection with their purchase of HelbizCoins in a coin offering by HelBiz Inc.7 Ten plaintiffs were named to represent the class, nine of which purchased their securities outside the U.S. and one failed to specify where his transaction took place.8 Additionally, the terms and conditions of the offering purported to prohibit the purchase of HelbizCoin in the U.S. or by U.S. citizens.9 Defendants argued that, under these facts, the plaintiffs’ claims could not withstand scrutiny under Morrison, as they failed to allege that any purchase or sale of securities occurred within the U.S.

In response, the plaintiffs first offered to amend their complaint to add details concerning the transactions of the tenth named plaintiff, who allegedly was a U.S. citizen who bought HelbizCoin while in Texas.10 Moreover, the plaintiffs then argued that regardless of the location of the purchasers, the transactions at issue were domestic because the physical machinery used to facilitate the transfer of HelbizCoin was located in the U.S.11 Indeed, all the servers used to issue HelbizCoins were located in Kansas, and the highest concentration of Ethereum blockchain nodes used to validate the transactions were also located within the U.S.12 The court rejected these arguments, holding that “Morrison dealt with the location of the change in the legal relationship between persons, not the electronic operations of creation, transport and delivery of the product.”13 The District Court therefore dismissed plaintiffs’ claims in their entirety.

The Second Circuit Court of Appeals disagreed. The Second Circuit first held that the District Court erred by applying Morrison where the plaintiffs’ claims were based solely on state law—making clear that Morrison applies only to claims brought under the federal securities laws.14 The Second Circuit held that the District Court further erred when it failed to allow the plaintiffs to amend their complaint to allege additional facts concerning the domestic nature of the transactions at issue, as well as to plead a claim under Section 10(b).15 The Second Circuit explained that amendment of the complaint “to plead that a named plaintiff is a citizen of Texas who purchased HelbizCoin domestically, allege additional facts concerning the domesticity of the [offering] and purchases of HelbizCoin, and expressly make a Section 10(b) fraud claim[]” would not be futile because it “could cure potential jurisdictional defects or federal and state law extraterritorial concerns.”16 While not a definitive pronouncement of the law, the fact that the Second Circuit remanded the case to the District Court specifically to allow the plaintiffs to both add a Section 10(b) claim and allege additional facts concerning the domestic nature of the offering, including facts other than the location of the tenth named plaintiff, signals that the Second Circuit views the application of Morrison with respect to cryptocurrency as a nuanced issue that will not solely turn on the physical location of the purchasers and sellers.

Investors Should Continue to Monitor this Issue

Further, while the Second Circuit did not directly address plaintiffs’ arguments concerning the location of the servers that hosted the offering of HelbizCoins and the Ethereum nodes that facilitated the transactions, on remand the district court will have the opportunity to reconsider its initial determination. Indeed, using these factors to determine that a cryptocurrency transaction occurred within the U.S. would not be unprecedented, as at least one federal district court has found these facts to be indicative of the domesticity of the transaction. In In re Tezos Sec. Litig., the District Court for the Northern District of California held that a plaintiff sufficiently pleaded that his purchase of cryptocurrency was domestic, and thus satisfied Morrison, in part because he “us[ed] an interactive website that was: (a) hosted on a server in Arizona and; (b) run primarily . . . in California. . . [and] his contribution of Ethereum to the [offering] became irrevocable only after it was validated by a network of global ‘nodes’ clustered more densely in the United States than in any other country.”17 Indeed, given that these are characteristics of all cryptocurrency transactions, how courts treat these factors moving forward will likely indicate the viability of 10(b) claims brought in connection with the sale of cryptocurrencies. Moreover, if courts were to accept these factors as indicative of the domestic nature of the transaction, it would also provide clarity to investors at the outset of their investment as to whether they will be protected by the federal securities laws. Accordingly, investors should continue to monitor this issue as courts continue to provide further guidance on Morrison’s application in the cryptocurrency context.

Cryptocurrency as a Security

Another notable takeaway from the district court’s opinion in Barron I, is the court’s analysis of whether HelbizCoin fell within the Exchange Act’s definition of security. While the Exchange Act enumerates a list of traditional securities, including stocks and bonds, that fall under its purview, the definition also includes “investment contract[s][.]” This provides investors an argument for classifying a non-traditional investment, including a cryptocurrency, as a security.18 In the seminal case of S.E.C. v. W.J. Howey Co., the Supreme Court defined an investment contract as a “contract, transaction or scheme whereby a person invests his money in a common enterprise and is led to expect profits solely from the efforts of the promoter or a third party[.]”19

In the context of cryptocurrencies, this definition is problematic because many cryptocurrencies can be used to obtain goods and services, which may mean that an investor is not “expect[ing] profits solely from the efforts” of another.20 However, in Barron I, the District Court held that HelbizCoins fell within Howey’s definition even though the coins could be redeemed on HelBiz’s vehicle rental platform. The court explained:

The economic reality is that buyers of Helbiz Coins in the [offering] expected they would profit from the tokens’ value rising along with demand as Helbiz used revenue from the [offering] to grow its transportation platform and promote token use. The token's admittedly trivial use as a transportation fare was dwarfed by its promotion, purchase and use as an investment product[.]21

Of course, at the time investors originally purchased HelbizCoin, they would have had no way of knowing that the District Court would make this determination. Indeed, while the SEC has advocated that most cryptocurrencies should be treated as securities,22 in recent remarks to the Senate Banking, Housing, and Urban Affairs Committee, SEC Chairman Gary Gensler likened the gaps in the securities laws with respect to cryptocurrency to “the Wild West or the old world of ‘buyer beware’ that existed before the securities laws were enacted.”23 To remedy this and protect investors, Gensler has repeatedly called for congressional action to close these gaps.24

In the absence of congressional action, investors have little clarity as to whether a potential investment in cryptocurrency will be protected by the federal securities laws.

12Id. at *5. While these nodes are located around the world, the United States houses more than twice the number of nodes as any other country. Id.