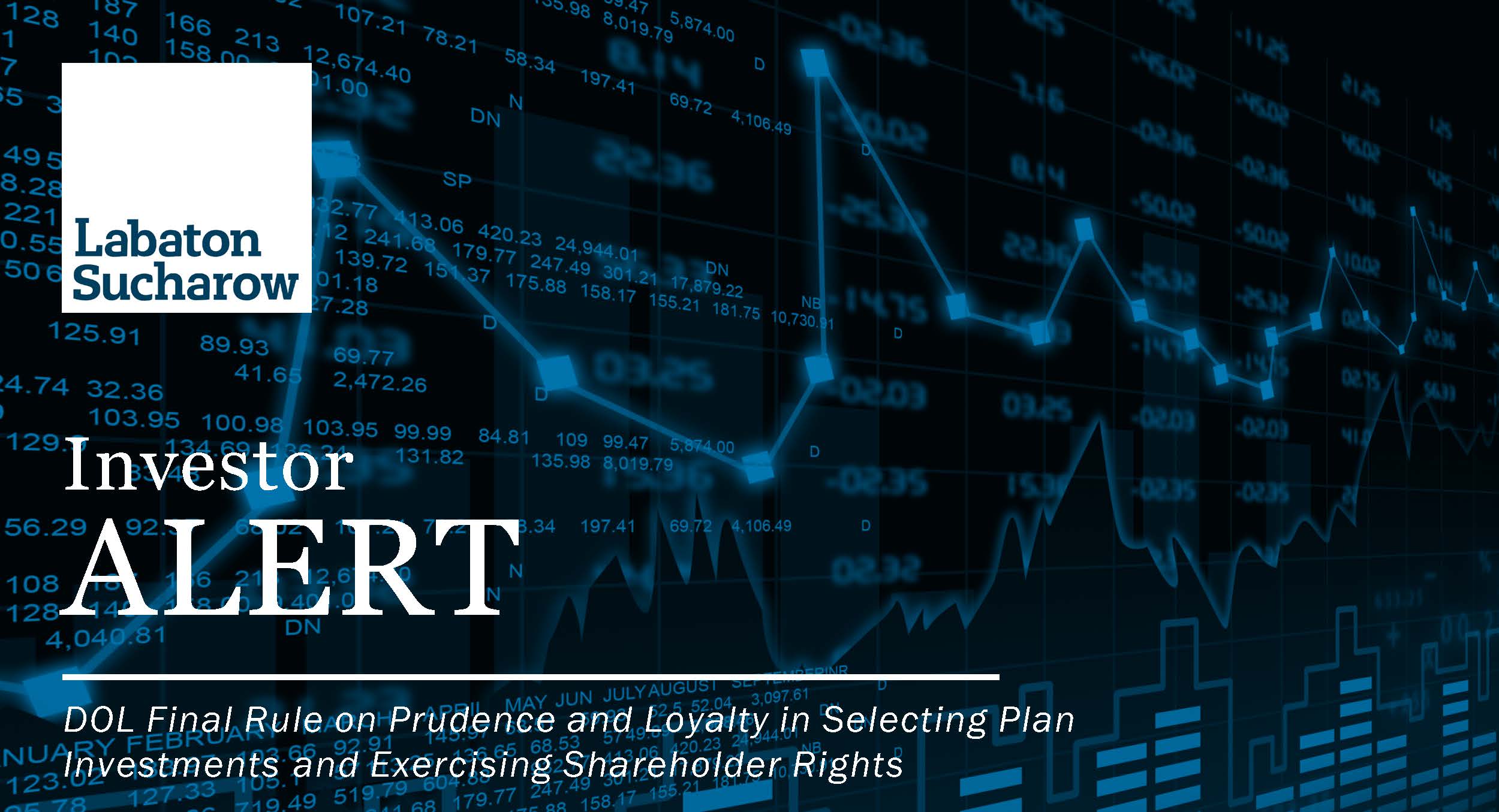 On November 22, 2022, the U.S. Department of Labor (“DOL”) issued a final rule under the Employee Retirement Income Security Act (“ERISA”) regarding the duties of plan fiduciaries, including the extent to which they may consider climate change and other environmental, social, and governance (“ESG”) factors, as well as when exercising shareholder rights (the “Final Rule”).1 The Final Rule will generally be effective 60 days after publication in the Federal Register.

According to the DOL, the Final Rule serves to address perceived uncertainties and concerns raised in connection with rules previously issued in 2020 (the “2020 Rules”).2 For example, there was confusion under the 2020 Rules whether funds would not be treated as qualified default investment alternatives (“QDIAs”) based on the consideration of non-pecuniary factors in making investment decisions. In a statement from DOL Assistant Secretary for Employee Benefit, the 2020 Rules “inadvertently caused more confusion than clarity,” thereby preventing ERISA plans from “taking actions other investors routinely take to improve performance and enhance their portfolio’s resilience to the effects of risks associated with climate change and other ESG factors.”3

Under 29 CFR § 2550.404a-1, ERISA plan fiduciaries are under a duty of prudence to make investment decisions “with the care, skill, prudence, and diligence under the circumstances then prevailing that a prudent person acting in a like capacity and familiar with such matters would use in the conduct of an enterprise of a like character and with like aim.” In order to clarify this duty as related to ESG factors, once effective, the Final Rule will expressly permit their consideration within the purview of a fiduciary’s duty of prudence. According to the Final Rule, ESGs may be considered relevant “to a risk and return analysis” which “depends on the individual facts and circumstances,” and “[t]he weight given to any factor by a fiduciary should appropriately reflect a reasonable assessment of its impact on risk-return.”

The Final Rule will also remove the special rules for QDIAs, such as 401(k) plans, as defined in 29 CFR § 2550.404c-5, introduced in the 2020 Rules. Under the 2020 Rules, investment funds cannot qualify as QDIAs if they include any non-pecuniary investment objectives or strategies. Under the Final Rule, standards applied to QDIAs will be no different from those applied to other investments. When selecting a QDIA, a plan fiduciary must, among other things, focus on relevant risk and return factors and not subordinate the interests of participants and beneficiaries to objectives unrelated to the provision of benefits under the plan.

The Final Rule will also alter the duty of loyalty for ERISA plan fiduciaries, which requires them to act with the “exclusive purpose of providing benefits to participants and their beneficiaries and defraying reasonable expenses of administering the plan.”4 Upon the Final Rule becoming effective, plan fiduciaries will be permitted to take plan participants’ non-financial preferences, such as socially conscious investment objectives, into account. In so doing, the Final Rule will also remove the “tiebreaker” provision of the 2020 Rules, which only permits the consideration of “non-pecuniary factors” when weighing competing investment decisions, which further requires fiduciaries to document, e.g., why pecuniary factors were insufficient to reach a determination and how such non-pecuniary factors were consistent with the interests of plan participants and beneficiaries.5 Under the Final Rule, ERISA plan fiduciaries will not be prohibited from selecting an investment or other objective based on collateral benefits and no longer need to comply with the special documentation requirement for such benefits.

Second, the Final Rule will remove the two “safe harbor” examples for permissible proxy voting policies set forth in current Paragraphs (e)(3)(i)(A) and (B) of Section 2550.404a-1, as implemented by the 2020 Rules. Currently, Paragraph (e)(3)(i)(A) permits “[a] policy to limit voting resources to particular types of proposals that the fiduciary has prudently determined are substantially related to the issuer’s business activities or are expected to have a material effect on the value of the investment.”7 Paragraph (e)(3)(i)(B) currently permits “[a] policy of refraining from voting on proposals or particular types of proposals when the plan’s holding in a single issuer relative to the plan’s total investment assets is below a quantitative threshold.”8 According to the DOL, these two safe harbors were against public policy in that they encouraged abstention, and in turn did not adequately protect the interests of plans and their beneficiaries.

11According to the Final Rule, changes to current Paragraph (e)(2)(iii) of Section 2550.404a-1 will not take effect until one year after publication in the Federal Register “to give additional time to plan fiduciaries to review proxy voting guidelines of proxy advisory firms and make any necessary changes in their arrangements with such firms.” Similar changes to current Paragraph (e)(4)(ii) of Section 2550.404a-1, which relates to proxy voting for pooled investment vehicles, will also take a year from publication to become effective.